The top-ranked New Jersey 87's ended things on high note this past week, despite dropping two of their final three games of the regular season. With an overall record of 32-3-3, this season was far and away the best in franchise history for the 87s, and finished with their first-ever Regular Season Championship. With this accomplishment the 87's enter the postseason as the favorites in the EHL, looking to accomplish what no previous Regular Season Champion has done before, and win the Playoff Championship in the very same year.

At #2, the Boston Jr Rangers applied good pressure to the 87's down the stretch, as they made a late push towards their 2nd consecutive Regular Season Championship. While they were unable to catch New Jersey, the Rangers still feel confident as they enter the postseason with a record of 32-5-1 and in possession of the only First Round bye in the Central Division.

Right behind the Rangers at #3 are the rival Walpole Express. At 26-10-2, the reigning Coach of the Year in Cody Campbell has brought his group a long way after starting the season with a mark of 0-4-1 in their first five games. The Express will now match-up with the Valley Jr Warriors in the First Round of the EHL Playoffs.

As for #4 and #5, we shift up to the North Division, and two teams heading into the postseason in different directions.

The New England Wolves jumped up a spot following a solid final week of the regular season, as they now enter the playoffs on a three-game winning streak and a 10-game stretch that saw them go 8-2-0.

Included in that stretch were a trio of wins over the New Hampshire Avalanche, who stumbled a little bit down the final stretch. While they enter the postseason having gone 4-6-0 in their last 10 games, don't write off the only organization that has won two EHL Playoff Championships.

Moving over to the EHLP, the Boston Jr Rangers moved up to #1 following a weekend sweep of three Central Division opponents. At 29-3-4, the Rangers have officially put the pressure on the #2 New Hampshire Avalanche who had appeared to be in control all season long with regards to the EHLP Regular Season Championship.

The Avalanche have three regular season games remaining in which they will have to claim all six points in order to secure their first-ever Regular Season title. If they are unable to do so it will be the 4th straight EHLP Regular Season Championship for the Rangers.

At #3, the New Jersey 87s secured the 3rd and final playoff bye when they locked up the South Division on Friday night. They will now await to find out the winner of the Philadelphia Little Flyers and New Jersey Renegades series to learn who their next opponent will be with a trip to the EHL Frozen Finals on the line.

Quietly, one of the hottest teams in the EHLP is the #4 Lumberjacks Hockey Club who've racked up the 5th most points in the league so far. While they've posted a .500 record of 5-5-0 in their last 10 games, they also have been the biggest thorn in the side of the Avalanche, knocking off their North Division rival three times since the beginning of February, and forcing overtime on a pair of additional occasions. 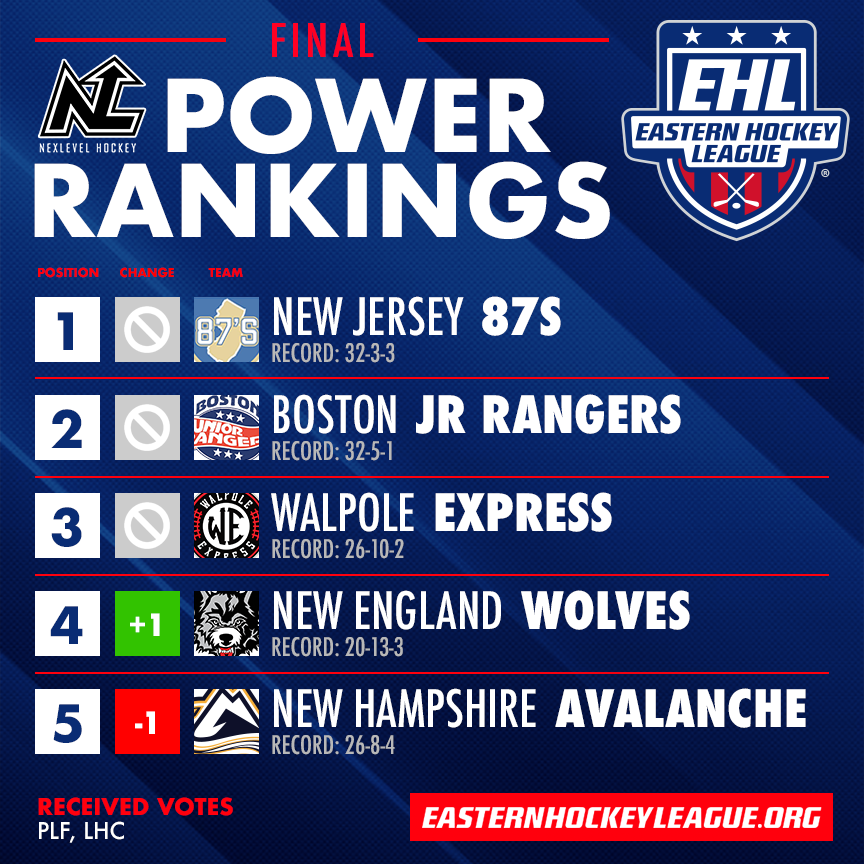 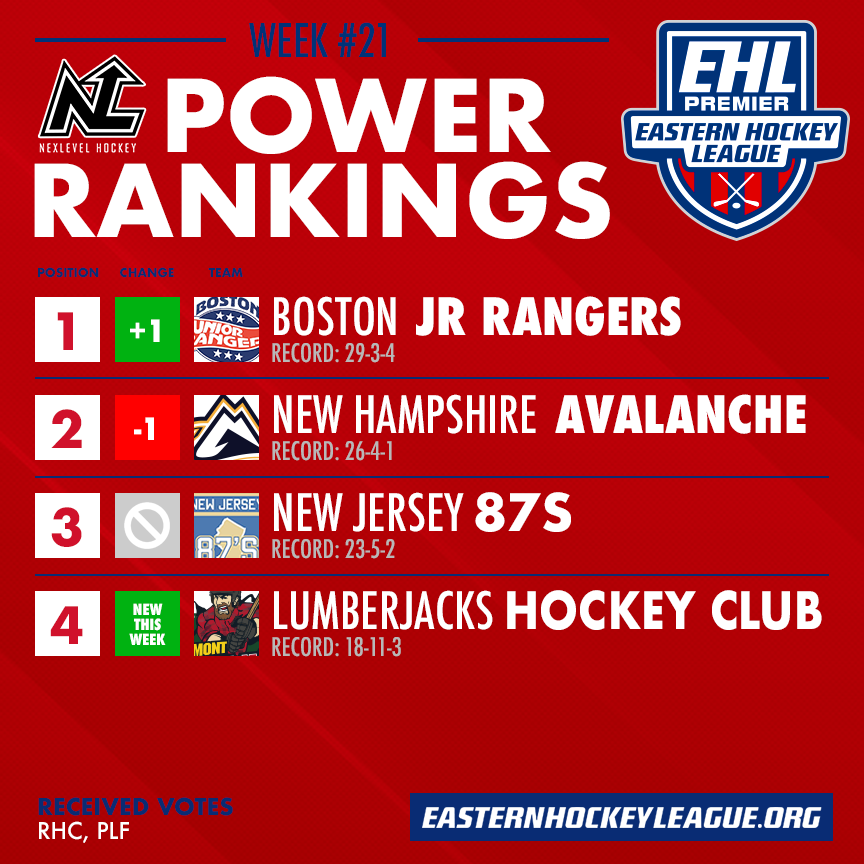