Postseason Play Begins this Morning in the EHL

BOSTON, MA -- On this week's episode of the #EShow we preview the First Round of the 2021 EHL Playoffs. While it's hard to believe that we are a little over one year removed from last season's playoffs getting cancelled, the #ECrew and the league as a whole are proud of where things currently stand. Throughout the newest episode of the podcast, we break down all of the matchups set to take place this upcoming week in the EHL. We also provide an update on how our fantasy rosters will shape up for playoffs, and how you can get involved with the "EHL version" of the March Madness bracket challenge.

Be sure to scroll down for previews of each individual First Round matchup, along with the breakdown of our fantasy rosters.

After six months of Eastern Hockey League (EHL) action, the league’s 2020-21 playoffs have arrived. Here’s everything that you need to know about the postseason’s first round – the Junior hockey community’s March Madness.

The North Division does not begin its postseason action until the second round activates – “due to a differing number of teams between each of the three divisions, the playoff formats vary in comparison between the North, Central, and South.”

For starters, the Boston Jr. Rangers earned a first-round bye. The Jr. Rangers finished in first place for the division after posting a 32-5-1 record (65PTS). So, there are three matchups in the Central for the first round of the postseason:

#2 Walpole Jr. Express vs. #7 Valley Jr. Warriors
The first-round matchups are a best of three series. However, not all are home-at-home and feature the lower ranked team hosting at least one home game. The Walpole-Valley series is a “1-1-1,” which means the higher-ranked seed in Walpole hosts Game 1 and Game 3.

Walpole is led by leading goal-scorer Zack Simon, who netted 20 goals and collected 33 assists for a total of 53 points on the year. Simon, 19, ranked third (tied) in scoring for the EHL this season, and Simon’s five game-winning goals finished fourth in the league.

The Jr. Warriors gave Walpole trouble this season and are the lone EHL team that defeated not only the Jr. Express, but also Boston and the New Hampshire Avalanche. On the score sheet, Ryan Nolte leads Valley with 24 points (14g-10a), and let’s not forget veteran defenseman Tyler Rossi. The Amherst, NY native leads (tied, Nolte) the Jr. Warriors with 10 points (1g-9a) on the power play.

The Chiefs and Seahawks faced-off on four occasions this season, which witnessed the Chiefs record a 3-1-0 record against the ‘Hawks. The two teams concluded their 2020-21 regular seasons on Sunday, Feb. 28, and it was the Chiefs who skated away with a 5-1 victory. While forward Matt Loftus led the Chiefs with 35 points (14g-21a), Jason Gordon ranked first (tied) in the EHL with 25 goals on the year.

Between the pipes, Seahawks goaltender Peyton Durand is a player to keep an eye on for this series. The 22-year-old not only earned 10 wins this season but recorded an impressive .928 save percentage. On the offensive side of the puck, forward Austin Pick led the Hawks with 16 tallies and 13 assists for 29 points.

While the Jr. Railers Hockey Club and East Coast Wizards both finished the 2020-21 campaign with 36 points in the standings after playing 38 contests, the Jr. Railers won the tie-breaker and earned home-ice advantage for the first round of the playoffs. The Jr. Railers totaled 18 wins on the year, which was one more than the Wizards’ 17.

The Jr. Railers and leading goal-scorer Matt Pimental (12g-18a—30PTS) defeated East Coast four out of six times this season and finished the year on a high note with consecutive wins. Keep an eye out for Jr. Railers’ goaltender Stefan Kulhanek. The Austria native not only tallied 15 wins this season, but has the potential to shutdown opponents and carry a team deep into the playoffs.

The Wizards aim to bring the magic and build off an exciting season. East Coast’s offensive threats are found in leading scorers Andrew Stefura (18g-21a—39PTS) and Ryan Turse (12g-25PTS). As for Stefura, the 6-foot-1 forward netted three goals and chipped in three assists against the Jr. Railers this season.

The No. 1 and No. 2 seeds in the New Jersey 87’s and Philadelphia Little Flyers earned first-round byes for the postseason. Which leaves four teams for the South Division to duke it out and have a shot at meeting either the 87’s or Little Flyers in the second round.

After ending the season on a six-game winning streak, the Protec Jr. Ducks clinched third place for the South Division. That also means that the Jr. Ducks earned home ice advantage for the first round and if necessary will host two out of three games against New York Apple Core.

Protec’s leading goal-scorers were team captain, Brody Selman (14g-25a—38PTS) and Tyler Ebeling who netted 13 goals and chipped in 18 assists for 31 points. The Jr. Ducks enter the postseason as the lone EHL team to shutout the New jersey 87’s for 2020-21, and also recorded a 4-2-0 record against Apple Core this season.

Apple Core’s offensive weapons rest in the hands of Michael Leva and Colin Callanan. Leva, 20, finished the campaign ranked second in the EHL with 58 points (21g-37a). As for Callanan, the EHL rookie skater tallied 16 goals and collected 24 assists for 40 points. Keep in mind that Apple Core’s masked man in Jackson Bernard led the league with 910 saves and was also one of the EHL’s Top Performers this season.

Team Maryland earned home ice advantage against the Connecticut RoughRiders, after posting a 16-15-7 (39PTS) record this season. Head coach Josh Fusco and company are led by EHL veteran Denys Arkhypenko (16g-22a—38PTS) and Bobby Geier who collected 16 goals and 20 helpers for 36 points on the year. Maryland enters the postseason on a six-game losing streak – but perhaps things turn around for the better in the postseason for Maryland.

The RoughRiders swept Maryland this season and won all four contests against their southern division rivals. Connecticut entails two of the league’s most explosive offensive skaters in Tyler Buonopane (21g-34a—55PTS) and Colin Bella (25g-29a—54PTS). Let’s not forget that Buonopane recorded three tallies and 11 assists on the power play this season. Additionally, the RoughRiders defeated Maryland on consecutive contests to close out the regular season by scores of 6-3 and 4-2. The North Andover, MA native in Buonopane recorded a total of six points in the two contests (2g-4a).

The Chiefs went 4-1-1 against their divisional rivals this season, and are led by leading goal-scorer Scott Bradley who recorded nine goals and nine assists for 18 points in 35 games played. The Jr. Warriors are hoping that David Zoerner (15g-18a—35PTS) can help lead Valley past the Chiefs and advance to the second round. 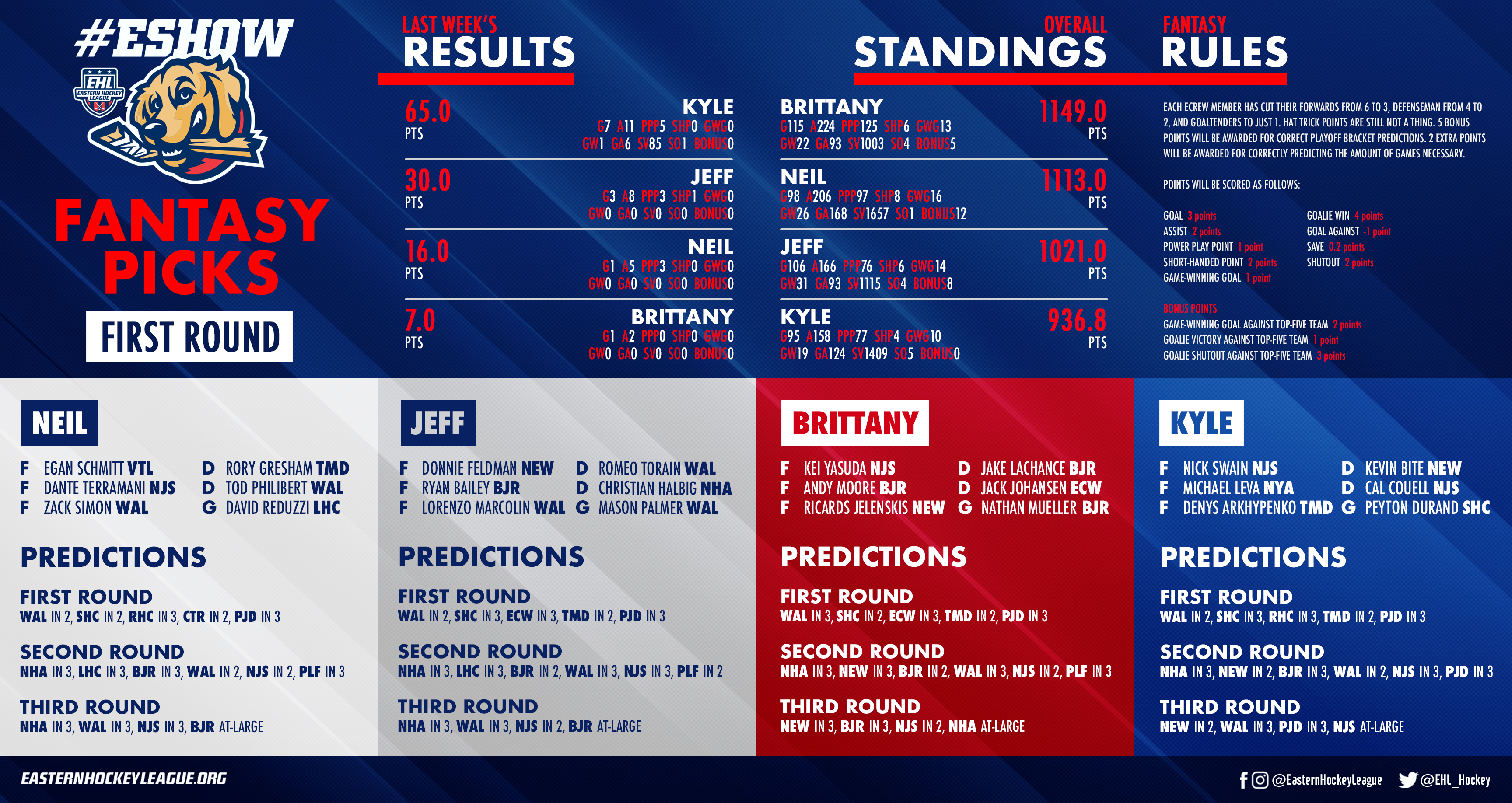