Below you'll find the 22nd set of weekly top performers featuring only players from the EHLP. The forward and defenseman awards are presented by Verbero Hockey, while the goalie honors come courtesy of Vaughn Custom Sports.

Duffy and the Lumberjacks hit the ice for just a single game in the final week of the regular season, taking care of business in a 4-3 victory over the New England Wolves. The '02 native of Queensbury, NY led the way offensively for his team, scoring a pair of goals and assisting on one more. Included in his performance was his 4th game-winning tally of the season.

Duffy finished the regular season with 20 points in 30 total games, and he will look to keep the momentum rolling into the playoffs, where the Lumberjacks will take on the Wolves. The winner of that North Division series will advance to take on the Avalanche with a trip to the Frozen Finals on the line.

Speaking of the Avalanche, Schmidt and his teammates hit the ice for a trio of games this past week. The Avalanche needed to claim all six out of a possible six points in order to clinch their first-ever EHLP Regular Season Championship. While it was not easy by any stretch, the Avalanche won all three games by a single goal, with a pair of contests requiring overtime to determine a winner. New Hampshire now enters the playoffs with a record of 29-4-1 and the favorites win it all down in West Chester, PA.

As for the '02 native of East Northport, NY, Schmidt tallied a pair of assists over the course of the week, giving him a total of 27 points in his first season of junior hockey. Schmidt finishes the year tied with Aaron Damren of the Lumberjacks for the league lead in defensive scoring.

Wrapping things up between the pipes, Jamison and the Renegades swept their final weekend of regular season action. The '01 native of Plattsburgh, NY was in net for the team's 2-0 victory over the Philadelphia Little Flyers on Friday, turning aside 45 shots in the winning effort. The win was Jamison's 7th of the season and his 3rd overall shutout.

Jamison will look to keep the momentum rolling into New Jersey's playoff matchup with the Little Flyers, as the winner of that series will advance to take on the New Jersey 87s in the South Division finals. 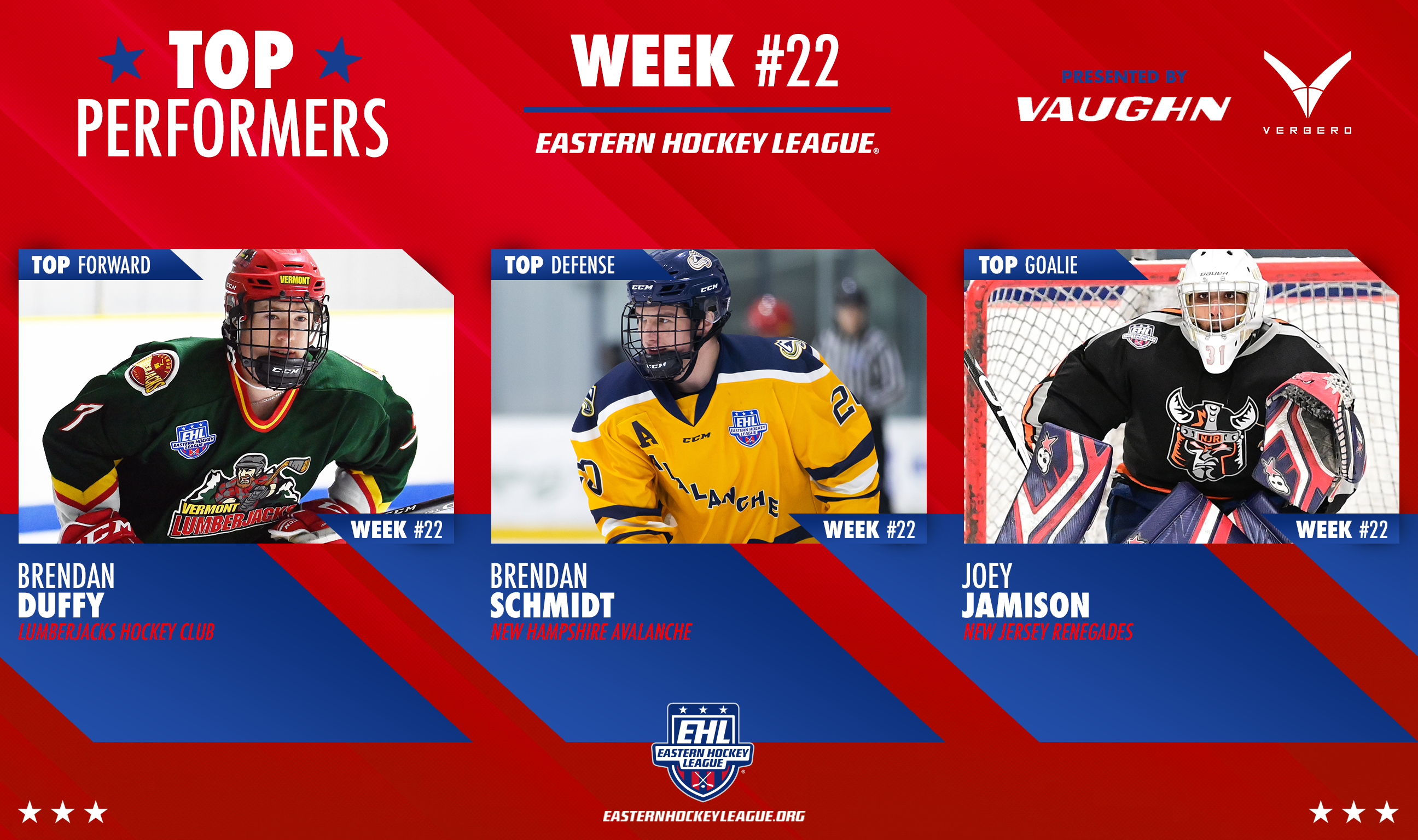