BREWSTER, NY -- Jackson Bernard, a goaltender for the New York Apple Core, has committed to Augsburg University for the fall of 2021.

The '01 native of Huntley, IL recently finished his first and only season in the Eastern Hockey League (EHL), winning eight games between the pipes this past year for the Apple Core. Bernard garnered respect from around the league with the numerous top performances he delivered, including 13 contests in which he recorded over 40 saves made.

"I know this is only junior hockey but he's a pro’s pro by the way Jackson conducts himself professionally both on and off the ice,” said Apple Core head coach and general manager Mike LaZazzera. “He’s the first guy on the ice and the last guy off, and one of the best puck-handling netminders I have ever coached at all levels I have been at. Throughout the season Jackson was like a third defenseman out there for us.”

"My goal has been to play college hockey since I started playing 9 years ago; I’m very excited that I now have that opportunity,” said Jackson. “When I took my visit to Augsburg I felt like the school was the best fit for me. Coach Brown, as well as the other coaches were so prepared and excited about having me on the visit. That then made me excited about the possibility of going there. Augsburg provides a big city feel being right in downtown Minneapolis, but also gives the small campus feel at the same time. Augsburg is a top contender in the MIAC annually, as well as a Top-10 ranked team in the nation, and I’m excited to help continue their success in whatever way I can. I can’t thank our [Apple Core] Coach LaZazzera enough for providing me the opportunity this year to play a lot of games and giving me the chance to get seen by schools. I also want to thank Matt Grogan, our Assistant Coach & Goaltending Coach, for all of the extra work we did together throughout the entire season as well as all of his hard work away from the rink cutting and editing video for me to study. I also want to thank my family, friends, and billets for all the support over my junior career.”

“Jackson was always prepared and ready to go," said Grogan. "His techniques are sound, and he's an elite puck handler who is never afraid to come out of the crease. Along with those traits, he shows a great work ethic and commitment to his team.” 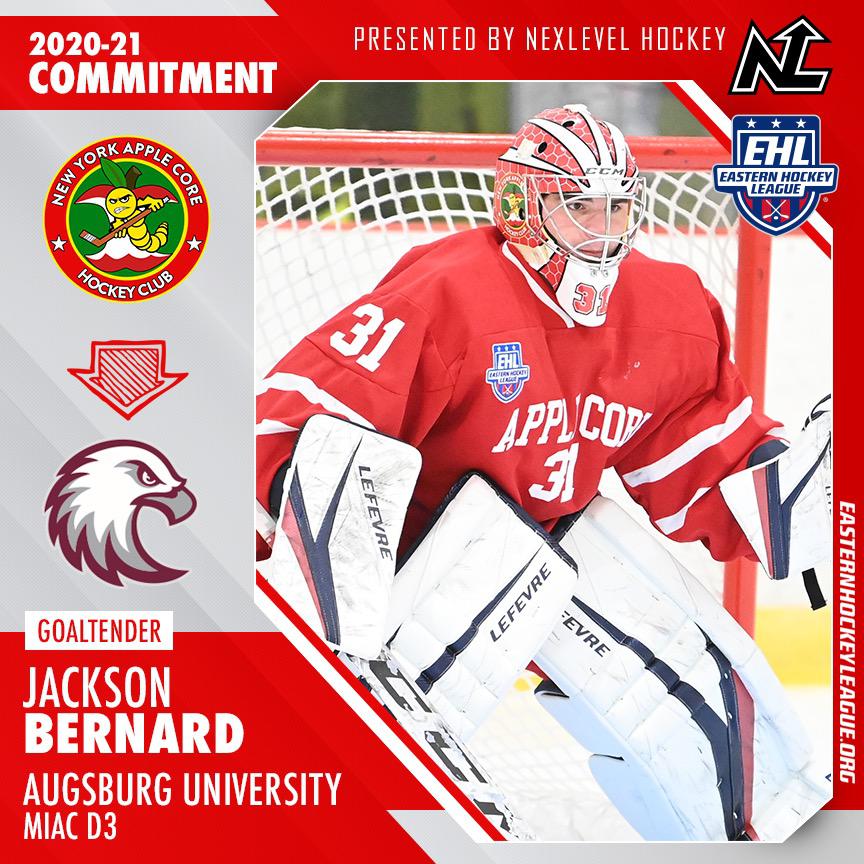