WORCESTER, MA -- PJ Donahue, a defenseman for the Railers Jr Hockey Club, has committed to Suffolk University for the fall of 2021.

The 2000-born native of Canton, MA recently finished his first and only season of junior hockey, and in 31 total games in the Eastern Hockey League (EHL), Donahue tallied seven points.

"PJ Donahue is the ultimate competitor, he works extremely hard and came in putting in extra time to learn our systems,” said Railers head coach Sean Bertoni. “We are very excited for PJ’s acceptance at Suffolk University. I look forward to seeing him play at the next level.”

Joe Lizotte, Donahue's 2020-21 teammate with the Railers, will also be heading to Suffolk this fall. The pair of Massachusetts natives are part of an incoming freshmen class that includes three other players from the around the EHL in Sergei Anisimov from the New England Wolves, Gus Butler from the Seahawks Hockey Club, and Connor Thomas from the New Hampshire Avalanche. As for Donahue, he was totally sold on everything Suffolk had to offer.

"It is the perfect fit for me,” said Donahue. “The business school as a whole was a big draw for me. I see Suffolk as a ‘sleeper’ school that doesn’t like to brag about its reputation, which goes along with my personality. It is in a great place, you can’t beat the location, right in downtown Boston. Suffolk being in Boston was definitely a factor. Coming from BC High, I went to school in the city for six years, so I figured I might as well continue that. I talked with Coach [Chris] Glionna and met some of the guys on the team and I knew the level of competition was the right fit for me.”

Donahue went on to receive extra praise from Mike Addesa, the General Manager of the Railers.

“This decision for PJ was a very difficult one,” said Addesa. “Guided by his family, he has always pursued excellence in academics, having attended BC High for six years and then Phillips Exeter. PJ was admitted to a number of the top academic institutions in the Northeast, which made this final choice so much more difficult. I endorse his choice of Suffolk University that has a number of programs that are internationally renowned. They also have one of the nation’s finest law schools, something else PJ and I have discussed while talking about his many choices. I want to thank PJ for his great contribution to our program. He brought great character, great work ethic, a strong desire to learn, and he was a great teammate. I wish him the very best moving forward.”

That sentiment from Addesa meant a lot to Donahue, along with the efforts from the rest of the coaching staff that helped him reach this moment.

“They [Railers staff] definitely had me thinking about my position,” added Donahue. “I was able to grow my game as a defenseman. They broke down what I needed to do, to become more methodical on the ice as a defenseman. They helped me grow my game, especially in the defensive zone. I am convinced that I am on the road to mastering my play at this position and therefore much better prepared to contribute at the college level.” 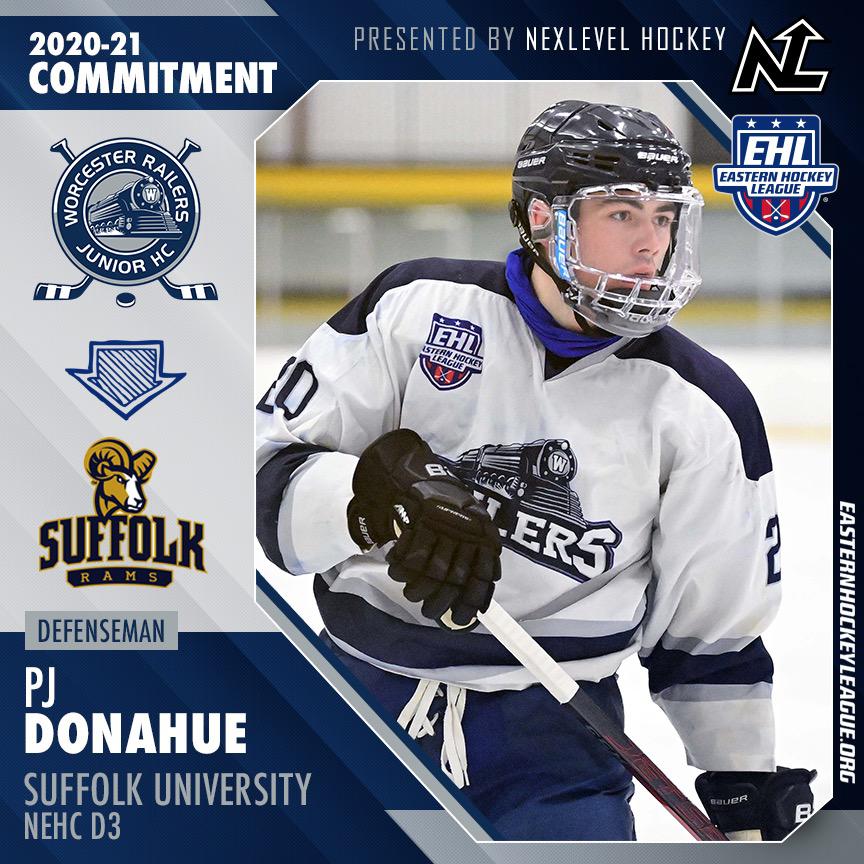