WATERVILLE VALLEY, NH -- Jeremy Swartz, a defenseman for the Lumberjacks Hockey Club, has committed to Nazareth College for the fall of 2021.

The 2000-born native of Rochester, NY came to the Lumberjacks for his final season of junior hockey, and in 41 total games in the Eastern Hockey League (EHL), Swartz posted 17 points (5 goals, 12 assists).

"Jeremy is one of the most mature and intelligent young men I have met in the game of hockey," said Lumberjacks head coach and general manager Jim Mosso. "He was an outstanding leader in our locker room, and at times, he was given the green light to manage the back end of the bench. He is physically tough, fast, smart, and calm under pressure. His partners in battle days hated being his opponent, and he raised the bar for everyone around him. He is extremely disciplined and dedicated in everything he does and I can’t wait to watch him bring that excellence into the locker room at Nazareth."

With his commitment now official, Swartz becomes the 23rd player in league history to choose Nazareth. The 6'2" defenseman is part of a six-player class compiled from five different teams across the EHL. The sturdy defenseman is beyond grateful to have earned the opportunity, and he gives a lot of credit to the Lumberjacks organization.

“The Vermont Lumberjacks organization helped me get this opportunity by providing me with a more than adequate platform to showcase my skill set in a highly college-recruited league," said Swartz. "Coach Mosso specifically believed in my potential and, as an older player, gave me the autonomy to lead our defensive core. This past year was anything but easy for the 'Jacks, and through the process I learned true perseverance and determination, which payed dividends in the organization’s first Frozen Four appearance. I would like to thank my parents, coaches, and most of all my teammates, as I am incredibly excited to extend my hockey career into college at Nazareth.”

Just prior to the conclusion of the 2020-21 season, Swartz was named a 1st-Team Defenseman for the North Division, which made its case as arguably the toughest of the three divisions this past year. 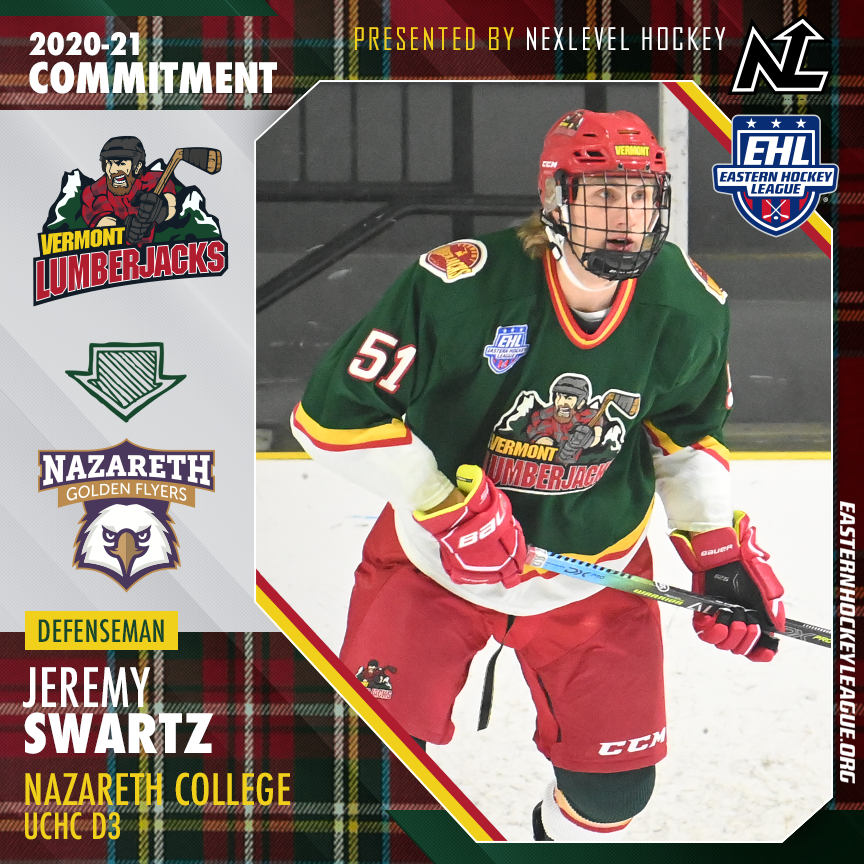