WATERVILLE VALLEY, NH -- Dylan Infantino, a defenseman for the Lumberjacks Hockey Club, has committed to Arcadia University for the fall of 2021.

The 2000-born native of Whitesboro, NY recently finished his 2nd year with the Lumberjacks and first full season in the Eastern Hockey League (EHL). Overall, Infantino tallied 12 points in 54 total games for Vermont.

"I am exceptionally proud of Dylan for this accomplishment," said Lumberjacks head coach and general manager Jim Mosso. "He came to us two years ago as a kid with tons of potential. I was extremely hard on him and he had to earn everything he has received. He became part of the backbone of the Lumberjacks' locker room the last two years and helped carry the torch of our success into this season. Arcadia has a great Fine Arts program that Dylan is excited about as well. He will be in good hands with Coach [Vincent] Pietrangelo and I can’t wait to see him play his college hockey there."

Infantino is one of seven EHL players from the 2020-21 season that will be heading off to Arcadia this fall. The seven total players come from five different teams throughout the league, and each individual brings a unique skill set that will help Coach Pietrangelo and the Knights' program, when they kick-off their inaugural campaign this fall.

"The Lumberjacks' culture is unlike anyone else’s," said Infantino. "The way the organization treats their players and molds both the Premier and EHL teams is second to none. I’m forever grateful for my experience and memories I made with Vermont and can’t thank Coach Mosso and the Lumberjacks enough for the opportunities they've opened up for me. I would also like to thank my teammates, as well as my parents, for helping me get to this point."

Infantino leaves behind a solid junior career that was capped off by helping to lead Vermont to their first-ever appearance at the EHL Frozen Finals this past March. 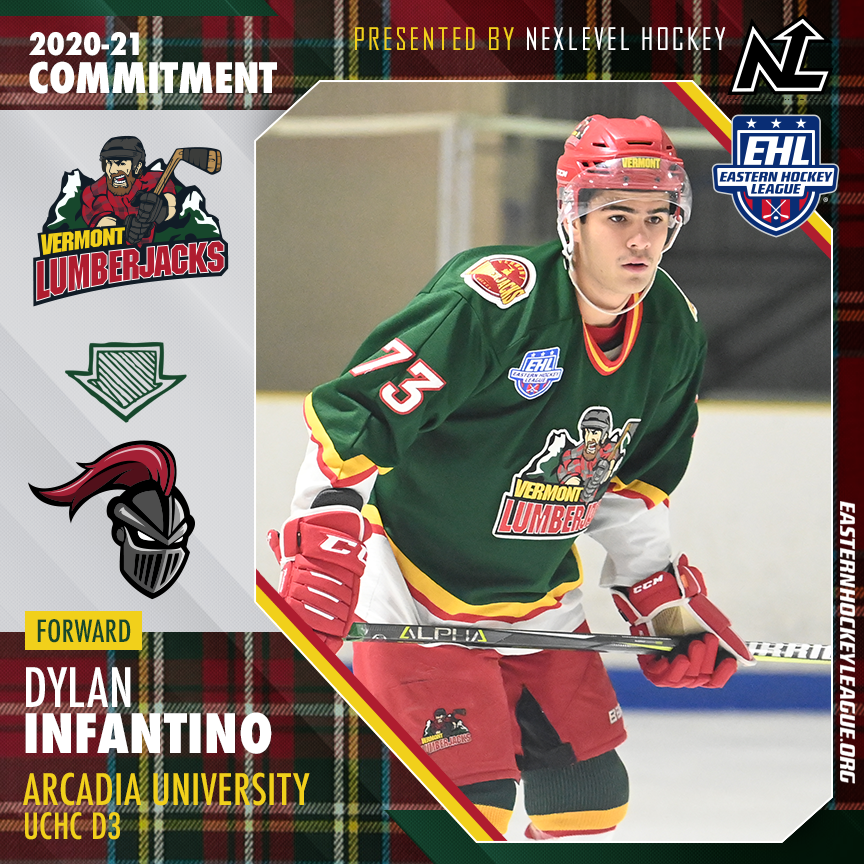