WALL TOWNSHIP, NJ -- Matt Herrick, a defenseman for the New Jersey 87s, has committed to Saint Anselm College for the fall of 2022.

The '01 native of Jackson, NJ is in his 2nd season with the 87's, and through 47 career games in the Eastern Hockey League (EHL), Herrick has notched three goals and 30 assists to his credit.

"Matt has worked extremely hard since he got here last year," said 87's head coach and general manager Adam Houli. "He's one of the hardest working guys off the ice; his on-ice play has tremendously improved and he's been a leader so it was really exciting to see him get something that he was excited about from the start. He did his due-diligence and it was a school high on his list and he performed when he needed to the most."

Herrick is the first EHL player to commit to St. Anselm so far this season, and overall, the 18th player in league history to choose the Hawks' program. The veteran defenseman knows that without the 87's, reaching this accomplishment might not have been possible.

"I wouldn't be here without Coach [Adam] Houli, Coach Matty [Kiernan], and all the boys. It's a team effort that I got the commitment, and I'm just so happy that I finally got it," said Herrick. "I love the way Saint Anselm plays, the NE10, the competition of the league, and I think it's just a great fit for me. I think I'm going to fit their style of play very nicely, I met a lot of the guys when I went up there for my visit and everyone was super cool. I felt like I was with the 87's, it felt like home."

Herrick went on to talk about working with Kiernan, and in particular, the attention to detail he highlighted for the defensive corps.

"He would give defensemen extra reps after practice, working on keeping the puck in the zone, getting it on net, different kinds of breakouts and everything," added Herrick. "Obviously, Houli was the one who brought me to the team and welcomed me with open arms just like all the boys did last year, and without them I wouldn't be the player I am today."

Speaking of Houli again, the reigning Coach of the Year in the EHL wrapped things up by speaking about the player Herrick has become and that the 87's need him to be, as he plays out his final season of junior hockey.

"He's a guy who came from what is considered Tier II and had some adjustments and realized how good this league can be, and I thought he adjusted really well," concluded Houli. "Now he's a guy who is impactful on the ice every time he steps on, a true difference-maker, and a college hockey player." 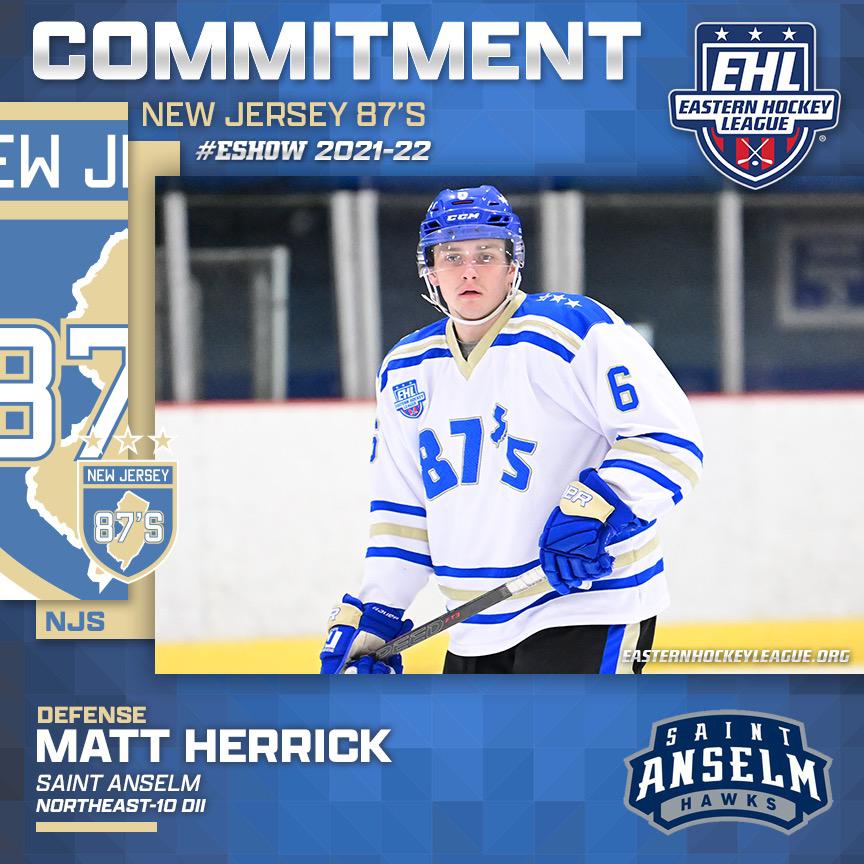