HOOKSETT, NH -- Baxter Kimball, a forward for the New Hampshire Avalanche, has committed to SUNY Fredonia for the fall of 2022.

"Baxter is a guy that believed in the process and didn’t rush," said Avalanche head coach and general manager Chris Cerrella. "He came up through our Midget Program, played some EHLP games, and then developed into a future college hockey player. He has been a huge part of the Avalanche program and we are so proud of his commitment to SUNY Fredonia. I am very excited for Baxter and his family!"

Kimball goes in the books as the 3rd player in Avalanche history to climb the EHLP to EHL to NCAA ladder from within their program, and it's also worth noting that he's the 1st player of that group to have also spent time developing at the midget levels in Hooksett.

Over the the course of his junior career to date, Kimball has tallied 63 total points, which included 46 during the full 2019-20 season he spent in the EHLP, and 17 in 41 career games in the EHL. Overall, Kimball knows that the timeline he followed is a big reason why he wound up where he is today.

“I am very excited to be joining not only a great hockey program, but also a great school in SUNY Fredonia," said Kimball. "I would like to thank Coach Cerrella, Coach Martiniello, Coach Caligiuri, and Coach Soryal for the endless hours of hard work they put into my development not only as a hockey player, but as a person. Coming to the Avalanche program 6 years ago was the best decision I could have ever made. I would also like to thank my family, teammates, and friends for helping me along the way. Without them, my dream of playing college hockey wouldn’t have been possible. I can’t wait to be a Blue Devil!"

Kimball and the Avalanche will play host to an EHL and EHLP double-header tomorrow against the Vermont Lumberjacks, in what will be each team's final game before the November Showcase. Puck drop for the EHLP game is set for 9:40 am, with the EHL game scheduled to follow at 12:40 pm. 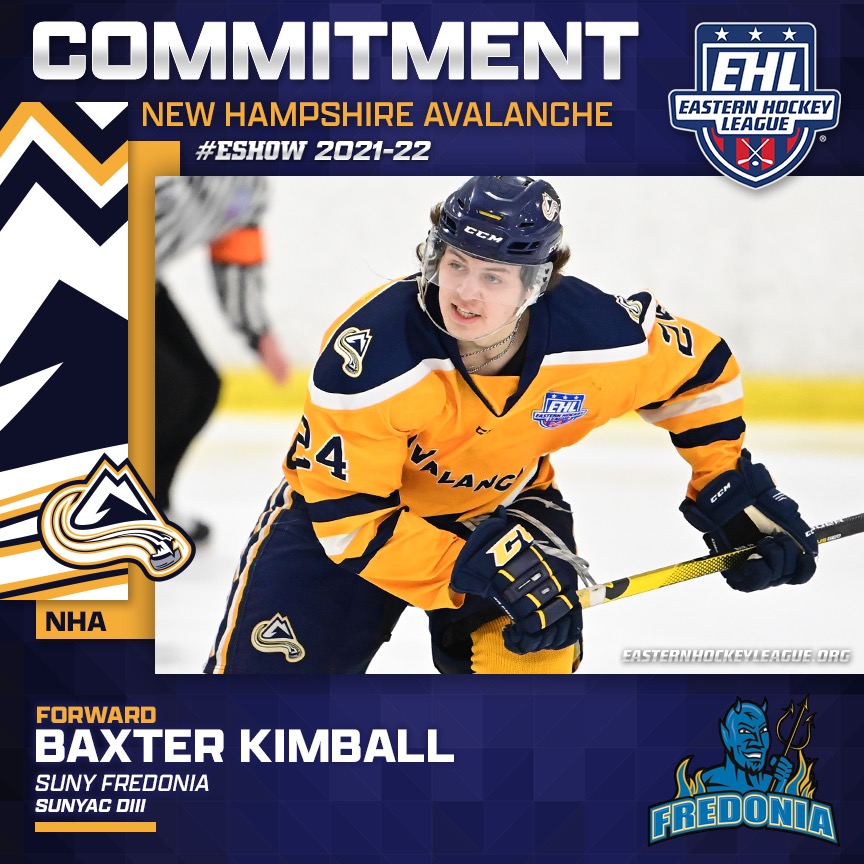