Below you'll find the 22nd set of weekly top performers in the #EShow. The forward and defensemen awards are presented by Verbero Hockey, while the goalie honors come courtesy of Vaughn Custom Sports.

Smirnov and the Little Flyers kept things rolling this past week by winning all three of their matchups and outscoring their opponents 22-13 along the way. Of the many players that helped set the pace for Philadelphia offensively, Smirnov led the way by racking up 10 total points to his name. For the season, the '01 native of Russia now has 52 points in 39 total games to date.

Winners of 13 out of their last 15 games, Smirnov and the Little Flyers have three games still remaining on their regular season schedule, as they look to secure the top seed in the upcoming South Division playoffs. While they do currently sit four points behind the 87's in the standings, New Jersey only has a single game remaining, and the Little Flyers hold the tiebreaker over their rivals. Therefore, another three-victory week would guarantee the top spot for Philadelphia, so they will look for a repeat massive performance out of one of their offensive catalysts to finish off the regular season.

Keeping things in the south, Brow and the Ducks posted a record of 2-0-1 in their three games this past week, keeping their chances alive for the #2 seed in their division. The '01 native of Monroe, MI was held off the scoresheet in his team's overtime loss against the Little Flyers on Tuesday, but then bounced back with seven total points in a two-game sweep of the Connecticut RoughRiders. For the season, Brow now has 38 points in 43 total games to date, and he's been named one of the finalists for the Defenseman of the Year award in the EHL.

Wrapping things up right where we started, in the South, the 87's won both of their games this past week, with Connor between the pipes we each victory. The '01 native of Hazlet, NJ now owns a record of 15-7-0 for the year, and 24-10-1 overall throughout his time in the EHL. The EHLP grad has been a big reason why the 87's have put together as solid a season as they have, and will be looking to help get his team back to the EHL Frozen Finals and earn a little revenge for himself in Providence, RI.

As mentioned above, Connor and the 87's have just a single game remaining on their regular season schedule, as they play host to the Connecticut Chiefs on Thursday. A victory in that contest, plus a little help from the teams facing the Little Flyers this week, will provide New Jersey with the top seed in the South.

Rambousek and the Wolves traveled south and picked up an even split of their four-game series with the New Jersey Renegades on Saturday and Sunday, with each team posting a record of 2-1-1. Rambousek tallied five total points throughout the weekend, running his overall total up to 25 points in 35 games to date.

Looking forward, Rambousek and the Wolves have four games remaining on their regular season schedule, all leading up to their First Round playoff matchup with the New Hampshire Avalanche.

Sticking with the same four-game series, while Rambousek helped lead the way for the Wolves, Carny countered for the Renegades. In the four total games, Carny tallied five points to his credit, including a pair of game-winning goals. For the year, Carny now has 16 points in 32 total games to date.

Similar to the Wolves once again, the Renegades finished 4th in their division, earning themselves a First Round playoff matchup with the Philadelphia Little Flyers.

Keeping with the trend of 87's goaltenders, New Jersey won both of their games this past weekend, with Loricco getting the win over the Connecticut Chiefs on Saturday. The '04 native of Hillsborough, NJ was nearly perfect in the contest, turning aside 33 of the 34 total shots that he faced.

Overall, the win was Loricco's 5th in a row and 8th of the year. The young netminder's record now stands at 8-6-0 to go along with a 2.64 GAA and a .921 save percentage. Loricco and the 87's are locked into their playoff matchup with the Chiefs, but home-ice for the series is still yet to be determined. 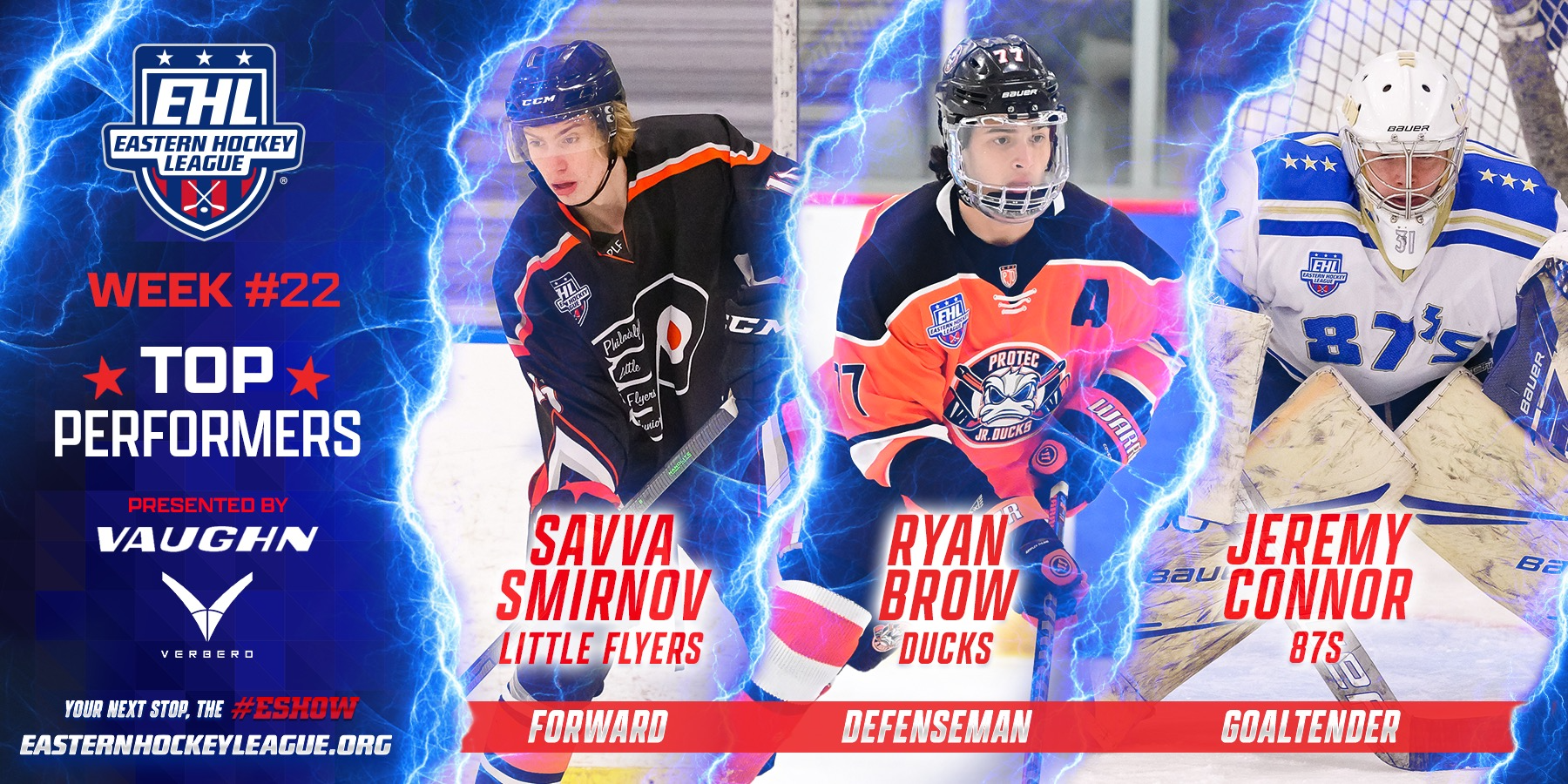 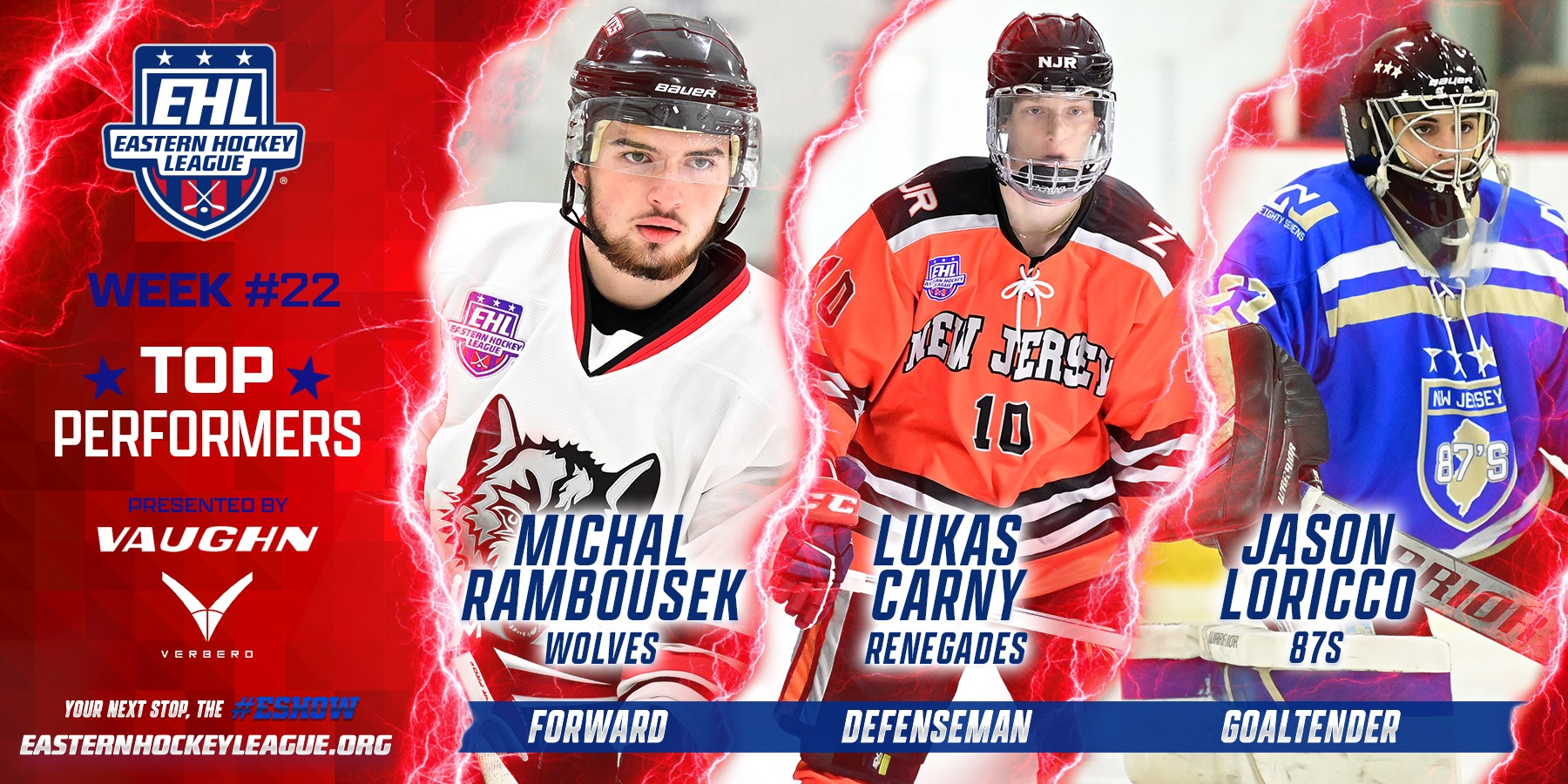