February Stars of the Month Presented By Vaughn and Verbero

Below you'll find the 6th set of monthly award winners in the #EShow. The forward and defenseman awards are presented by Verbero Hockey, while the goalie recognition comes courtesy of Vaughn Custom Sports.

You could make the case that what Bella did in the month of February, likely will never be duplicated. In just 10 total games, the '01 native of Norwalk, CT scored 16 goals and collected seven assists. In the process he became the greatest goal scorer in the history of the EHL as he now sits at the top of both the all-time record books and single season record books.

Fast-forward to the two games that he already played in March, and Bella has already notched a pair of hat-tricks so far this month. Overall, Bella averaged better than a goal-per-game during the regular season, finishing with 47 tallies to his credit. When you then tack on the additional 35 assists that the veteran forward collected, Bella's league-leading 82-point season makes him the front-runner for the 2021-22 EHL Most Valuable Player award. We will now see if there is an encore performance on tap for all of us, when Bella and the RoughRiders take on the Connecticut Chiefs in the First Round of the EHL Playoffs.

Kvandal, Kilgallen, and the Wolves posted a record of 8-2-0 in the month of February, helping New England to climb up into 2nd place in the North Division standings. As for Kvandal, the '01 captain from Norway led the way on the back-end, tallying 13 total points throughout the month, which also led all defensemen in the EHL. For the season, Kvandal finished with 30 points and 45 total games, helping to secure his NCAA Commitment to Curry College.

As for Kilgallen, the '01 native of Brighton, MA was an anchor for his team in goal, winning all eight of his starts throughout the month. The perfect final month of the regular season improved Kilgallen's record up to 12-3-0 for the season, to go along with a 2.90 GAA and a .908 save percentage.

Kvandal and the Kilgallen were two of the key cogs that have the Wolves feeling confident as they enter the postseason. Up 1st in the First Round of the playoffs for New England, will be a rematch with the team that knocked them out of the postseason last year, the Vermont Lumberjacks.

The EHLP is pleased to announce that Johnny Lee (Philadelphia Little Flyers), Chris Merryman (Boston Jr Rangers), and Cam Wickens (Railers Jr Hockey Club) have been named the February Stars of the Month.

Lee and the Little Flyers posted a record of 6-1-1 in the month of February, en route to officially locking up the #1 seed in the South Division and a First Round matchup with the New Jersey Renegades.

As for the '03 native of Aston, PA, Lee tallied at least a point in all eight contests, finishing the month with six goals and seven goals to his credit. As we now turn over to March in the EHLP, Lee has racked up 44 points in 39 total games to date, making him a candidate for multiple end of season awards.

We then shift to the East Division for the final two awards of the month, as the race between the Rangers and Railers is heating up.

First, for the Rangers, Merryman helped lead his team to a 5-2-0 record in seven games in the month of February. The '03 native of Peabody, MA tallied eight points along the way, giving him seven goals and 16 assists in 38 total games to date. Playing in his 1st season of junior hockey, Merryman has turned heads across the league, which is a big reason why the young defensemen is a candidate for both the Defenseman of the Year award and the EHLP Top Prospect award.

As for Wickens, the '04 native of Revere, MA won four games in the month of February, improving his record up to 17-5-0 for the season. When you add in the 1.77 GAA, the .921 save percentage, and the two shutouts, it becomes apparent why Wickens is one of the leading candidates for the Goaltender of the Year honor.

Looking forward, the Railers currently hold a two-point advantage over the Rangers at the top of the standings, with a huge matchup looming on Wednesday the 9th. It's safe to say that the winner of that showdown, will likely secure the #1 seed in the First Round of the postseason. 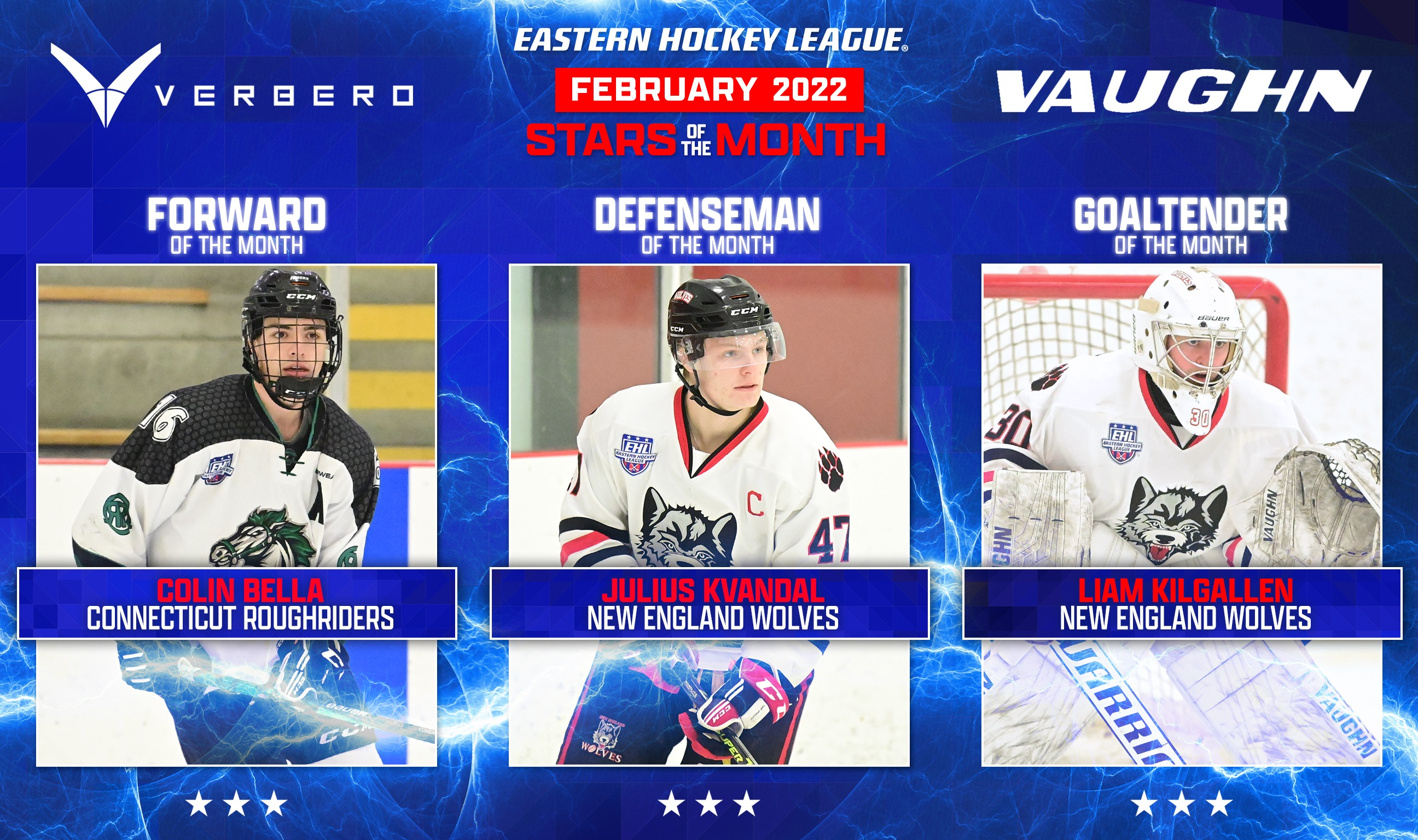 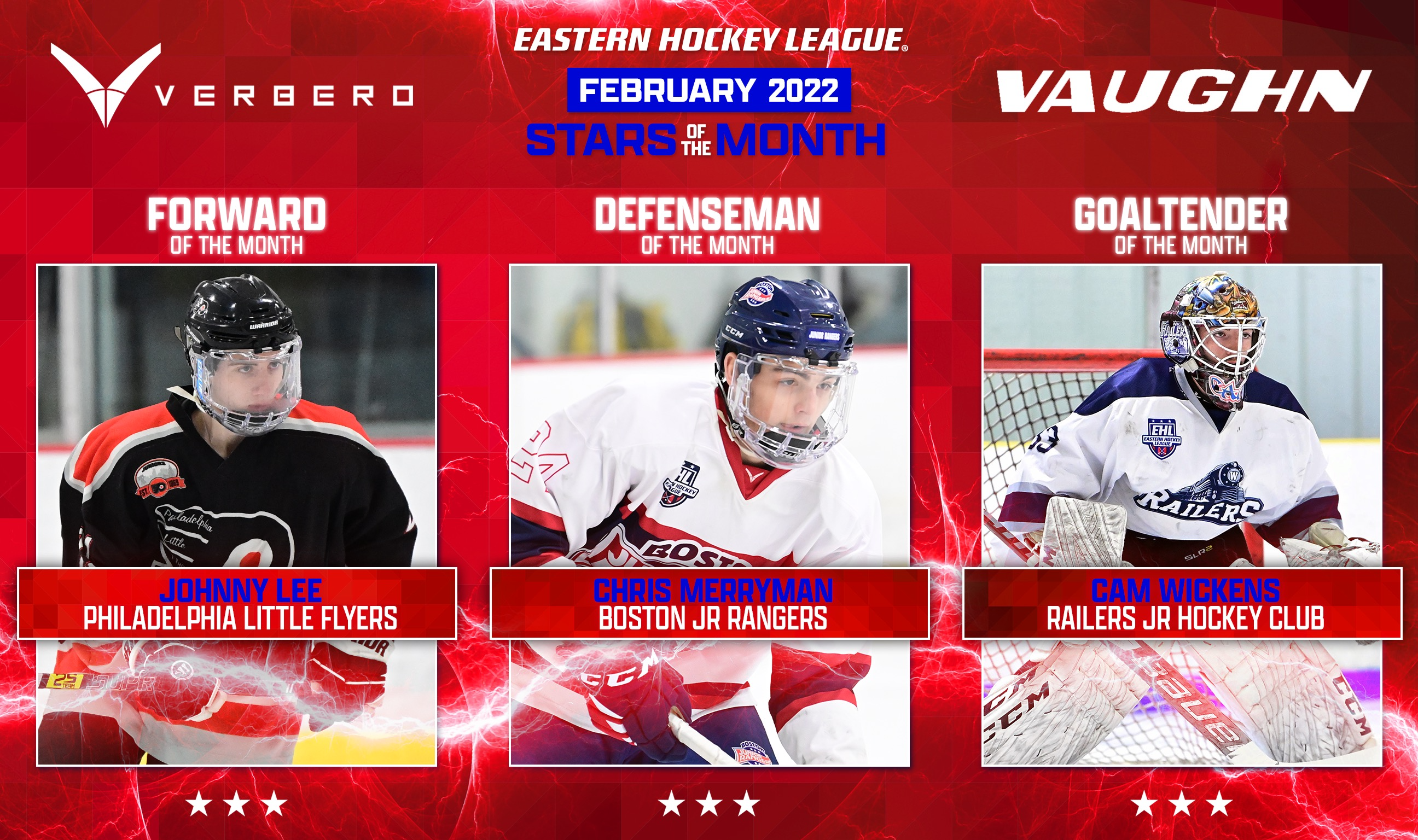