Below you'll find the 25th set of weekly top performers in the #EShow. The forward and defensemen awards are presented by Verbero Hockey, while the goalie honors come courtesy of Vaughn Custom Sports.

For the 2nd straight week, Pimental and the Railers went the distance with their Central Division. After getting by the New York Apple Core in three games during the First Round, the Railers followed suit in three games with the Connecticut Chiefs in the Second Round, thus securing their first-ever bid to the Frozen Finals in franchise history.

As for the '01 native of East Providence, RI, and recent Stonehill College commit, Pimental picked up a goal in all three contests, scoring five total times throughout the series. Overall, Pimental now has seven goals so far this postseason, including a pair of game-winners. The tests will only get harder from here on out for Pimental and the Railers, as the two-year captain will look to keep things rolling as his team's first matchup at the finals will put Worcester up against Henson and the Little Flyers.

Before we get to Henson and the Little Flyers, we'll stop in the East Division, where Overland and the Express pulled off the only upset of the Second Round. After knocking off the East Coast Wizards in three games during Round #1, Walpole took care of business in just two games against the Boston Jr Rangers in Round #2.

As for the '01 native of Las Vegas, NV, Overland collected a pair of assists in the series, but more importantly, played a key role in helping to hold the Rangers to just two total goals scored. Walpole will be looking to continue with the strong defensive effort, as their first-ever appearance in the Frozen Finals will kick-off this year's event, as they take on the New Hampshire Avalanche.

Wrapping things up with Henson in net, the '01 native of Troy, MI was arguably the biggest reason that Philadelphia swept the New Jersey 87s, to become the kings of the South Division. Henson was excellent in the two-game series, turning aside 68 of the 71 total shots that he faced. Overall, to go along with his perfect 4-0-0 postseason record, Henson has put together a pair of additional stellar marks with a 1.75 GAA and a .950 save percentage.

While next week will mark franchise firsts for the Railers and Express, that won't be the case for the Little Flyers, who will be making their 3rd appearance at the league's championship event. While Philadelphia has been the Providence on multiple occasions, this is however the program's first trip since 2019, when they fell to the Avalanche in that year's Championship Game.

Hamelin and the Lumberjacks endured an offensive explosion in their First Round matchup with the Valley Jr Warriors, sweeping the two-game series and advancing on to the North Division Finals where they will hit the ice for a rematch with the New Hampshire Avalanche. As for the '02 native of Canada, Hamelin tallied tallied six total points throughout the series, with an even three goals and three assists apiece.

As we just mentioned, the matchup with the Avalanche is rematch of last year's North Division Finals, which were won by the Lumberjacks. After the Avalanche won game #1, Vermont picked up back-to-back wins overtime, to claw their way to their first-ever trip to the Frozen Finals. The positive for the Avalanche this year is that they already won the Regular Season Championship, so regardless of the outcome of this series, they are guaranteed a spot in Providence.

Continuing on, we get to the Rangers and Railers, two teams that will be huge fans of the Avalanche this week. If New Hampshire can win their series with the Lumberjacks, then outcome of the East Division Finals will become irrelevant with the loser of the series earning the automatic at-large bid.

Regardless of that fact, each team did their part to get to this point, starting with Merryman helping to lead the Rangers past the Seahawks Hockey Club. The top defensive prospect this season in the EHLP, helped hold the Seahawks at bay in their two-game sweep, but also contributed five points of his own with a goal and four assists. Combined between the regular season the postseason, the '03 native of Peabody, MA now has 30 points in 43 total games.

Sticking with EHLP award winners, the Goalie of the Year helped anchor the Railers in their First Round sweep of the Walpole Express. After stopping 27 of the 28 shots he faced in game #1, the '04 native of Revere, MA delivered an additional 36 saves in game #2.

While the North Finals will run Wednesday, Thursday, and Sunday, the East Finals are set for Thursday, Saturday, and Sunday, which means the Railers and the Rangers will each be doing some scoreboard watching throughout the week. 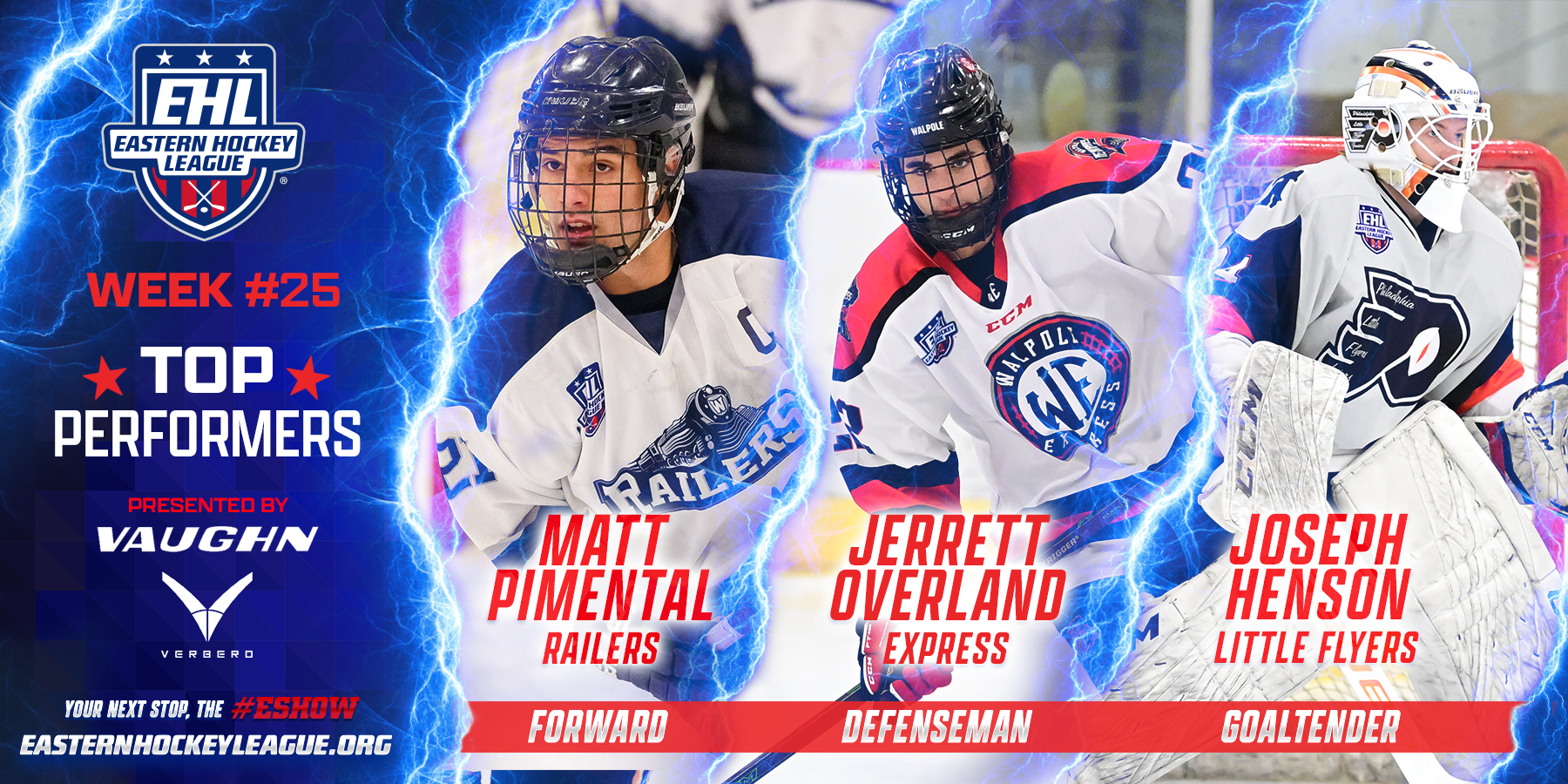 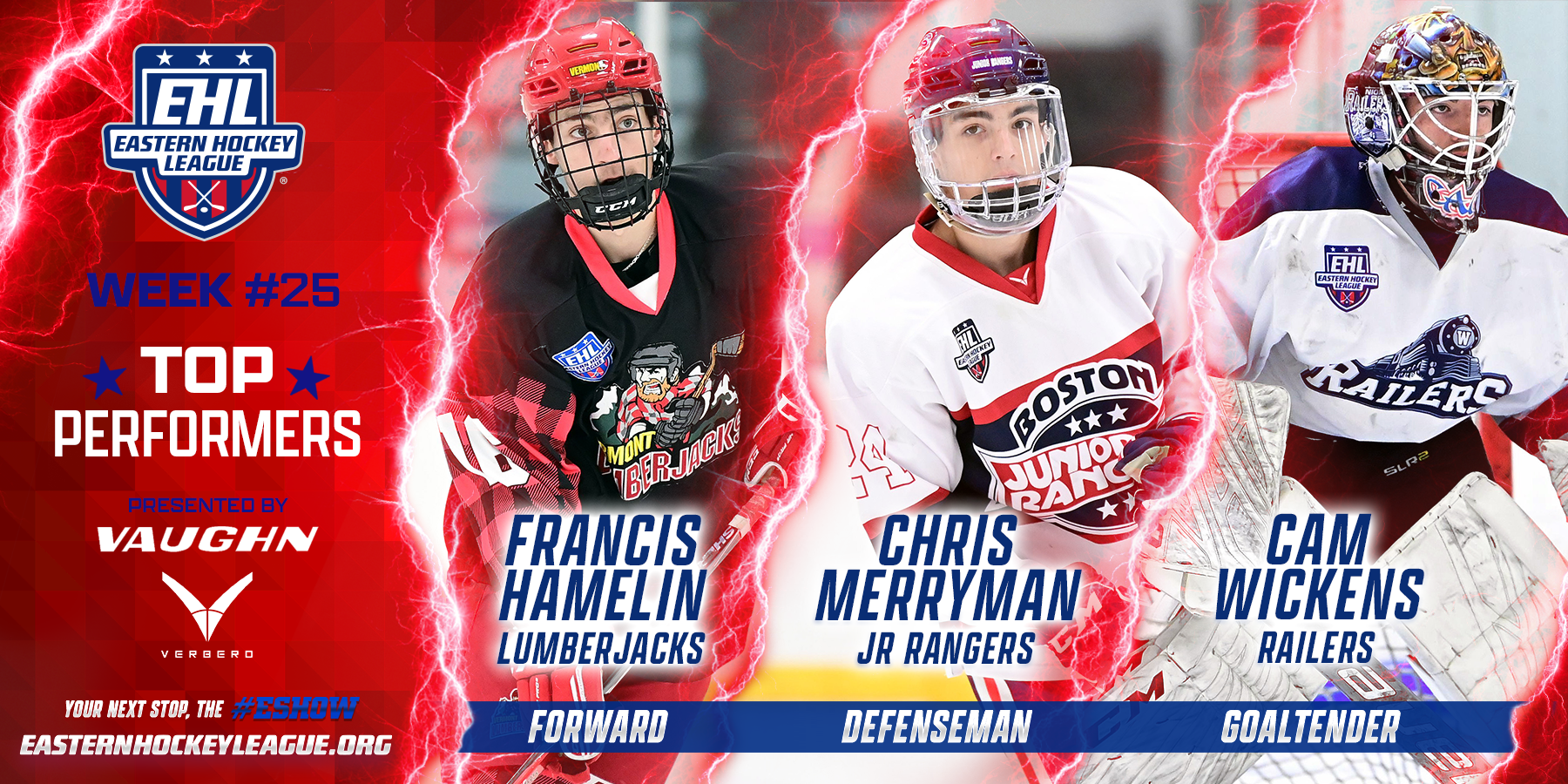