EXETER, NH -- Thomas McGaffigan, a forward for the Seacoast Spartans, has committed to Assumption University for the fall of 2022.

The '02 native of Cambridge, MA recently finished his 1st and only season with the Spartans, and in 47 total Eastern Hockey League (EHL) games, McGaffigan collected 21 goals and 20 assists to his credit.

"I couldn’t be happier for Thomas and his family," said Spartans head coach and general manager Brett Tryder. "He was our most consistent player, all season long. McGaffigan is the type of player that could have played in any era. He played in every situation for us. He was on our top power-play unit and our top penalty kill, and his consistency showed in his point totals. He was an even 20 goals and 20 assists. I am positive that he will be a successful college hockey player. It is always satisfying to send a player like Thomas to college. He is talented, hard-working, and he is a great teammate. Assumption is getting a great player.”

Despite being only an '02 birth year, with a year of junior hockey eligibility still remaining, McGaffigan is ready to make the jump right now to the next level. Overall, the talented playmaker is the 22nd player in league history to choose the Assumption, and he's part of a three-player EHL class heading out to Worcester this fall. Alongside his Spartans teammate Michael O'Brien, McGaffigan will join up with Jake DiNapoli of the East Coast Wizards.

“Playing at Seacoast was an absolute blast," said McGaffigan. "The coaches and players created a family bond that I will always remember. I would like to thank Seacoast for making me a better player and person throughout the year. I am honored to get the opportunity to continue my career at Assumption University. Playing college hockey has been a dream of mine from a very young age.”

Learn more about the Spartans on the team's official website, and check out the full 2021-22 NCAA commitment list. 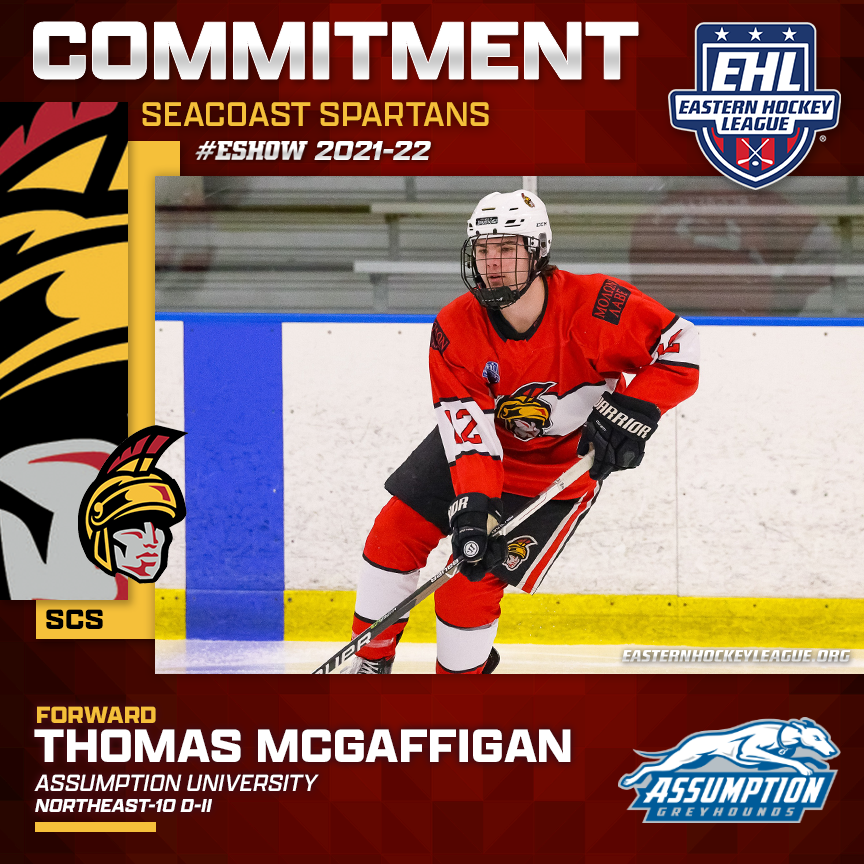