Lumberjacks Forward Set to Join Penmen in the Fall of 2017

BURLINGTON, VT -- Zach Sarnowski, a forward for the Vermont Lumberjacks, has committed to the Southern New Hampshire University for the Fall of 2017. In his first season with the Lumberjacks, Sarnowski tallied 32 points in 41 total games.

“Our organization is excited for Zach and wish him the best in his pursuit of an academic degree and his hockey career," said Lumberjacks head coach Doc DelCastillo. "We look forward to following his college career beginning in the Fall of 2017. ”

After playing 55 games with the Amarillo Bulls (NAHL) last season, the native of Florida made the move to Vermont. Sarnowski knows how much his time with the Lumberjacks meant to his NCAA Commitment.

“I am ecstatic to announce my commitment to Southern New Hampshire University for the upcoming season," said Sarnowski. "I would like to thank my family, teammates and everyone in the Lumberjacks Organization for giving me the opportunity to play the game I love and extending that to the next level next season. Thanks again to everyone that I've encountered on this crazy journey, I couldn't have done it without you.” 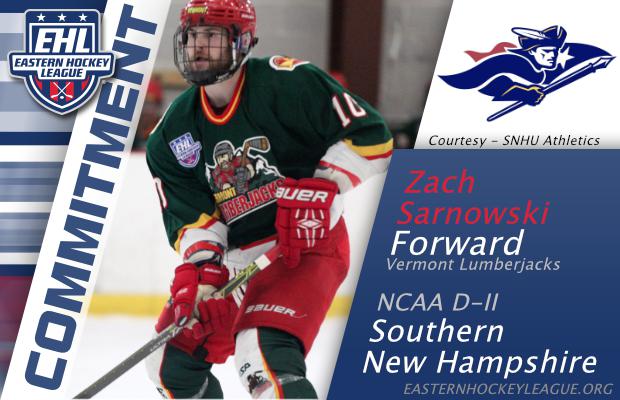