Lumberjacks Forward Set to Join Falcons in the Fall of 2017

BURLINGTON, VT -- Ryan Hill, a forward for the Vermont Lumberjacks, has committed to the University of Wisconsin-River Falls for the Fall of 2017. The '96 forward tallied 28 points while playing in every single game for the Lumberjacks this season.

“We know that Ryan will do well in any situation that presents itself," said Lumberjacks head coach Doc DelCastillo. "We wish him the very best in his pursuit of a degree and his hockey career. We are excited to follow his college career beginning in the Fall of 2017.”

After playing for the New York Bobcats last season, Hill made the move to Vermont this year. The native of Wisconsin knows how valuable his time in Burlington meant to making his NCAA Commitment to a school back in his home state.

“I am proud to announce my commitment to the University of Wisconsin-River Falls for the Fall of 2017," said Hill. "I would like to thank my family, Coach Doc, and the entire Lumberjacks organization for helping me achieve my dream of playing college hockey.  I am looking forward to being back in my home state of Wisconsin to play hockey and go to school. I am excited about being a student-athlete at UW-River Falls and I am proud to be a Falcon." 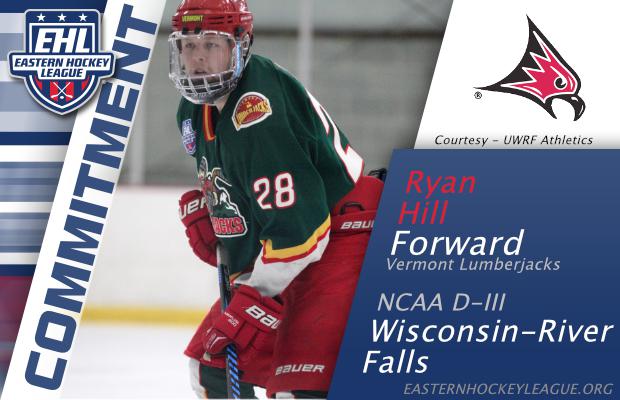