Lumberjacks Forward Set to Join Spartans in the Fall of 2017

BURLINGTON, VT -- Dom Kuziak, a forward for the Vermont Lumberjacks, has committed to Castleton University for the Fall of 2017. In his final season with the Lumberjacks, Kuziak led his team with 62 points in 49 total games.

“Our organization is extremely proud of Dom and wish him all the best in his academic and hockey pursuits," said Lumberjacks head coach Doc DelCastillo. "It will be exciting to follow Dom’s college career beginning in the Fall of 2017."

After tallying 29 points for the Lumberjacks last season, the '96 native of New York returned to Vermont with sights set on his NCAA Commitment. Kuziak fulfilled his goals with a terrific final year of junior hockey.

“I am pleased to announce my commitment to Castleton University for this upcoming Fall," said Kuziak. "Thank you to Coach Doc and the entire Lumberjacks organization for a great 2 years in Burlington. I also would like to thank my family for supporting me throughout this journey. I’m excited to start my journey as a student-athlete at Castleton. Go Spartans!” 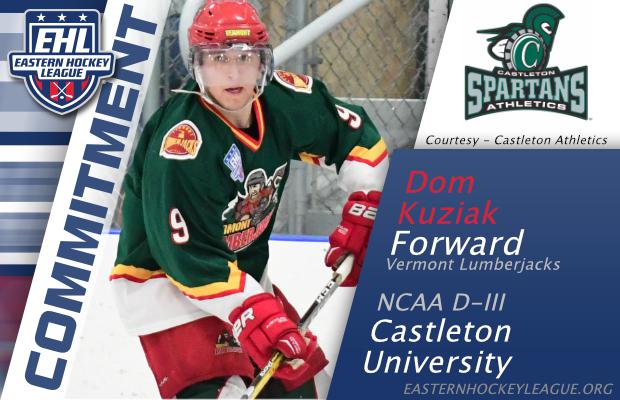