A Year Later, the EHL Still Leads the Way

BOSTON, MA -- As the fourth season of the Eastern Hockey League (EHL) comes to a close, the USA Hockey Tier III junior league continues to lead the way in Direct-To-College advancement. Nearly one in every five NCAA Division II and III freshmen this past season, played previously in the EHL.

“Back in 2013, 20 programs came together to form the EHL,” said Mark Kumpel, the EHL’s Director of Hockey Operations, and a former NHL player. “From the very beginning, the owners and coaches have been, and still are, committed to being the top direct-to-college advancement junior league in the East,” said Kumpel. “While some teams have changed along the way, the owners have invested in coaching staffs, infrastructure, and the EHL brand to create a nurturing hockey environment that has directly led to over 500 players moving on to schools and successful careers both on and off the ice.”

While Kumpel references change within the junior hockey environment, the EHL continues to stay true to its mission statement of providing a direct path to college hockey for all of our players.

With 131 players advancing to over 50 different schools this past season, the EHL also prides itself on finding the right fit for each of our players. Every player has a different story and a different set of goals. Take Sean Holly of the East Coast Wizards as an example. Holly was a plus defenseman for the Wizards this past year, with seven points in 52 total games. After playing at Central Catholic High School in Lawrence, the ’97 spent last season at the Kents Hill School in Maine before joining the Wizards this year.

All the while, Holly’s goal was set on committing to a Division III school in the NESCAC (New England Small College Athletic Conference). That goal became a reality when Holly made his commitment to Colby College while playing for the Wizards.

“I’m excited at the prospect of joining a prestigious program such as Colby, as well as being able to play in the NESCAC Division where every game is competitive,” said Holly. “The highly experienced coaching staff of the Wizards taught me the importance of the minute details of the game. I learned the value of daily preparation, and how it takes a complete effort to be able to play at the next level.”

Holly is just one great example of how the EHL helps players find the perfect next step in both their academic and athletic careers.

For another example, Austin Kelly just finished his freshman season at the University of Wisconsin at Stevens Point. After playing for the Philadelphia Little Flyers, Kelly knew his time in the EHL helped lead him to one of the top programs in all of Division III, a program that won the 2016 National Championship.

“The EHL was a great league for me and helped me develop each year to become a better player both on and off the ice,” said Kelly. “The Little Flyers opened the door for me to get where I am today at a great school playing great hockey.”

The list of player examples is endless when it comes to the EHL, and it will only continue to grow as the league keeps developing. Each season brings with it a unique set of challenges, but the backbone behind all of the success is the great set of coaches within the league.

In breaking down the different coaches in the EHL, you can’t go wrong with any of the choices, so let’s start with Jon Lounsbury of the Walpole Express.

Lounsbury embodies the “Direct Path to College Hockey” motto by having sent a league-leading 65 players to Division II and III schools dating back to the EHL’s formation in 2013.

Lounsbury’s high commitment totals have stayed consistent throughout his time in Walpole, and a strong reputation has come from his success. The former All-American at the University of Southern Maine brings in a new group of players each season, and moves over three quarters of them on to college after just one season in the EHL.

Lounsbury is the type of coach that believes in recruiting the right group of guys from the beginning, and sticking with that roster until the season ends.

The same can be said for Rocky Russo, as the Little Flyers dressed just 28 different players over the course of the 2016-17 season.

With the teams and leagues reshaping this off-season, Russo and the remaining EHL coaches all feel strongly about focusing on the same group of guys that they start next season with. The coaches are committed to these players and will continue to do whatever it takes to help their players advance to the next level.

“The EHL is a professionally run league that does a fantastic job of marketing and showcasing our players,” said Russo. “As a coach, it is easy to recruit because the player placement numbers have been there for years. Young men know that if they are looking for NCAA exposure on the East Coast that the EHL is the best option for them.”

Just like Holly and Kelly were two great player examples of the EHL’s success, Lounsbury and Russo have each won Coach of the Year honors and represent the backbone that leads the EHL.

For the remaining head coaches, the core group includes a pair of Hockey East alumni in Eric Lind (RoughRiders/UNH) and Freddy Meyer (Wizards/BU).

Outside of the Hockey East, Rich DeCaprio (Rangers) won a CHA title while playing at Niagara, and Chris Cerrella (Avalanche) still remains the leading scorer at  Quinnipiac University.

We keep rolling with Jon Rogger (Revolution) and Doc DelCastillo (Lumberjacks), a pair of coaches who each bring years of experience to the EHL. Both have enjoyed great success within other tiers of U.S. junior hockey (USHL and NAHL).

Last but certainly not least, Andrew Trimble (Wolves), Graham Johnson (Apple Core), Jerry Domish (Jr. Flyers), and Andy Heinze (Warriors) help round out a strong core of leaders in the EHL, ready to expand to new heights starting in the Fall of 2017.

As the EHL prepares for season No. 5, this is the first off-season led by Mike Santos, who was appointed Executive Director back in November.

Santos comes to the EHL with 28 years of experience in the hockey industry. He spent his undergrad years at Boston College, received his Master’s Degree from the United States Sports Academy in 1989, and earned his Juris Doctorate from St. John’s University School of Law in 1998.

“There’s a lot to like about the league and the collective commitment to developing players for bigger and better things. It’s my plan to accentuate all that’s great about the league,” Santos added. “My time spent organizing and growing the North American Hockey League will only help me as the EHL grows its brand within USA Hockey.”

As we prepare to turn the hockey calendar over to the 2017-18 season, the EHL continues to deliver a clear and precise message. We provide a competitive league for players of different ages and skill sets, and for those aspiring to reach the Division II and III ranks, there is no higher league in terms of placing players directly on to these rosters.

Another year in the books, and the EHL is still leading the way.

Read more about the EHL on the official website of the USA Junior Hockey Magazine. 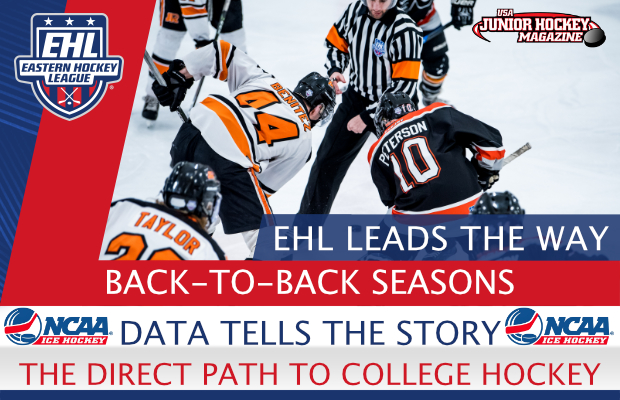