WEST CHESTER, PA -- Braden King, a defenseman for the Philadelphia Jr. Flyers, has committed to UMass Dartmouth for the fall of 2019.

The '98 native of Media, PA is in his first season with the Jr. Flyers, and to date, he's tallied 11 points in 34 total games in the Eastern Hockey League (EHL).

"He brought us a physical presence and a veteran presence," said Jr. Flyers head coach and general manager Jerry Domish. "His skating is much better. Also, he is much more under control, and not just taking off all over the ice. Braden is more aware of his responsibilities and now has more game sense. His shot, along with his willingness to learn and become a better player, are his best attributes. I think he will need to continue to grow as a player and if he does, he will be an asset after his first season.”

As Domish mentioned, King has progressed throughout his first and only season in the EHL. That's a true testament to the league, as he'll to continue to improve when he arrives at the next level. King is the first EHL player to commit to join the Corsairs this season, but he also extends the league's streak of sending at least one player per year to UMass Dartmouth, since #Eshow was formed back in 2013. Overall, King is the 23rd player in league history to make this decision.

"I want to thank Coach Domish and Coach Ben [Brouillard], as they have been a huge help this year," said King. "I want to say thanks to my mom, dad, brother, and sister for all of their support and letting me strive for my dream to play college hockey. I want to thank my teammates who have pushed me everyday to become a better player on and off the ice. I also want to thank Sam Hunt for helping me get looks from colleges. Lastly, thank you to everyone in the Jr. Flyers organization, I couldn’t have done it without them.”

King went on to talk about his plans for when he arrives at the next level.

"I plan on working as hard as I can," added King. "I am a strong believer in the phrase ‘nothing is given to you, and you have to earn everything.’ That is the mentality I am going to have next year.”

With this decision now complete, King will turn his full attention towards the upcoming EHL Playoffs, in which the Jr. Flyers will enter as the #5 seed in the Mid-Atlantic Conference. 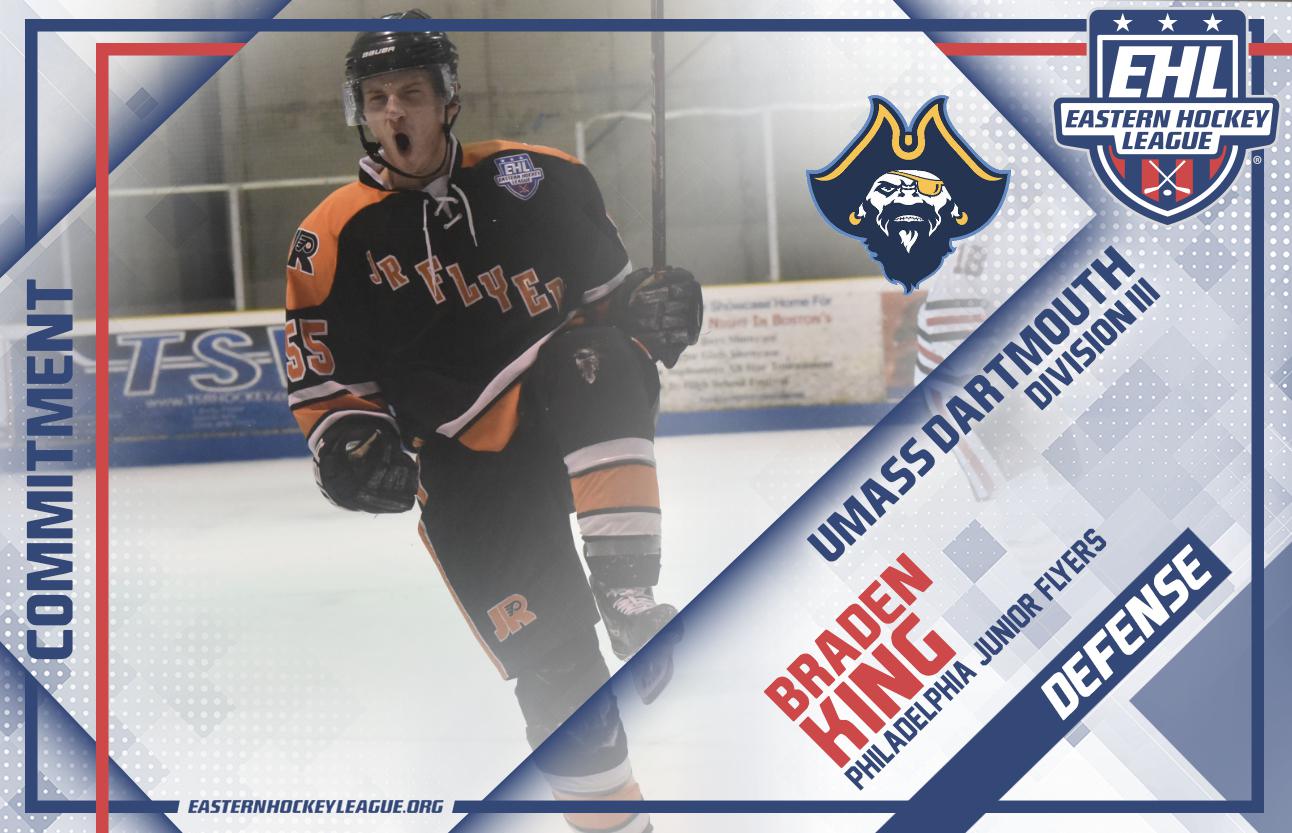