The Field is Set for Providence

BOSTON, MA -- The Second Round of the Eastern Hockey League (EHL) playoffs is complete, and we're now onto the EHL Frozen Finals. Below you'll find full recaps of all four Second Round series, including a pair of matchups that were decided by just a single goal in the third and final game of each respective set.

Breaking down each contest, and game #1 started off with even play, that was until the Little Flyers exploded for three goals in the final 7:19 of the opening period. While there was no scoring in the middle frame, the Little Flyers were able to ice the matchup right near the halfway point of the 3rd period. Brendahn Brawley made 26 saves between the pipes, as the Little Flyers won 4-1.

The Little Flyers are now set to return to Providence for the second consecutive season. 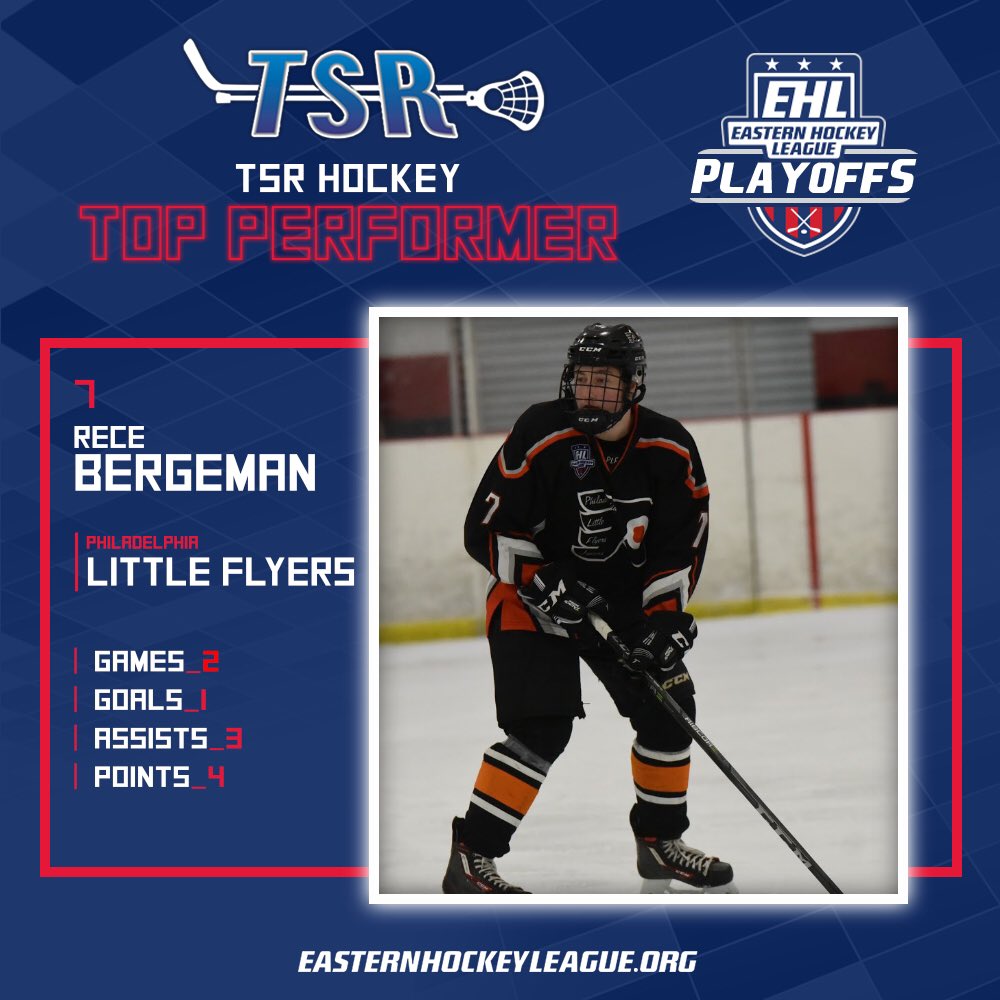 The next series to come to an end took place in the New England Conference, as the East Coast Wizards snuck by the Vermont Lumberjacks in the decisive third and final game of their series.

Starting with game #1, and it was great beginning of the series for the Wizards. After Andrew Harley scored the only goal of the 1st period, the Wizards stretched their lead out to three goals twice in the 2nd period. However, Vermont wouldn't go quietly. The Lumberjacks got to within a single goal twice during their comeback, but the difference stood as the tally from Tim Usalis with 0.2 seconds remaining in the 2nd period. Korbinian Lutz also played a key role for the Wizards, turning aside 38 shots in the 5-4 victory.

Move along to game #2, and this one was all Lumberjacks. Paced by three power-play goals, Vermont never trailed in the contest, and Connor Carbo was simply stellar between the pipes. Logan Discanio and Geordan Buffoline each notched three points apiece in the 4-1 victory.

Our first game #3 of the EHL Playoffs came this past Friday, and it was a classic. Carbo played a mega role for his team once again, as for what felt like almost the whole game, the Lumberjacks led by the score of 1-0. Things quickly turned however, when Steve Rizzuto scored a pair of goals just over three minutes apart from each other, and the Wizards held on for a 2-1 victory.

The Wizards are now heading to Providence for the first time in franchise history. 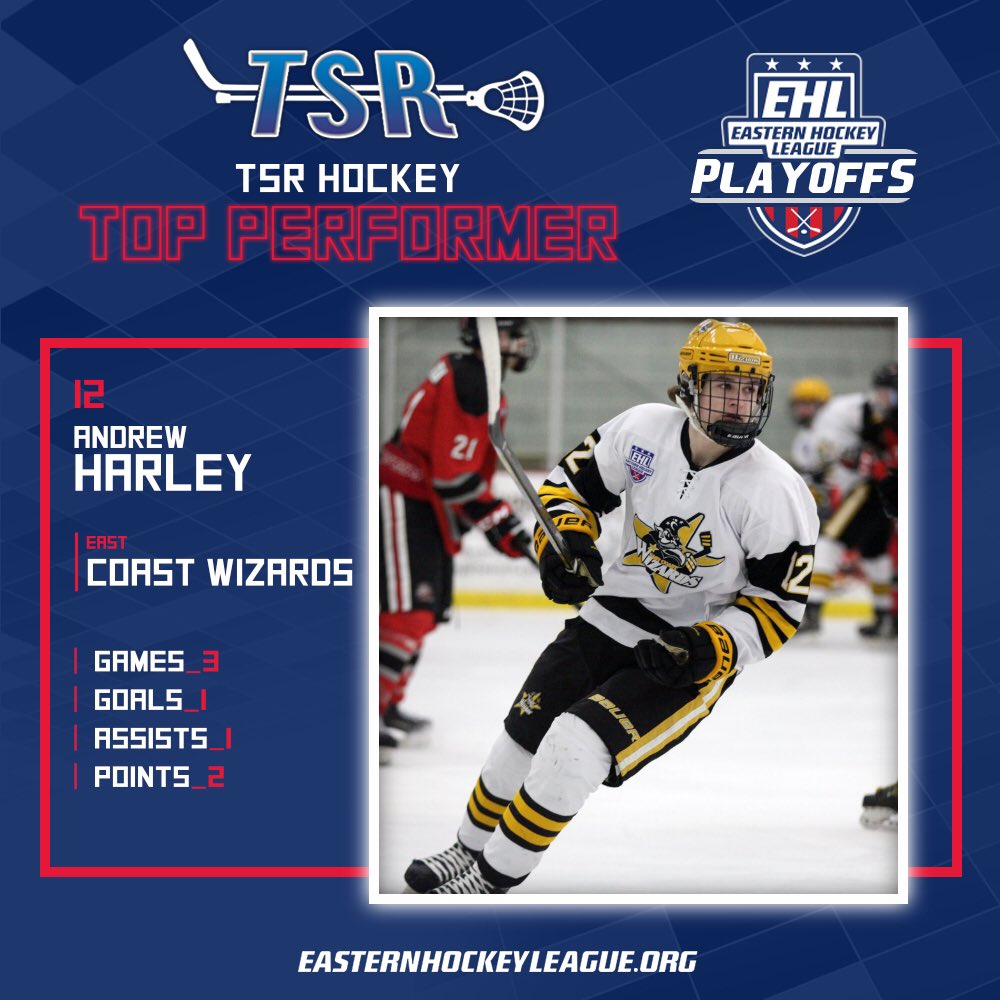 Sticking up north, and we had another two-game sweep as the New Hampshire Avalanche got past the Boston Jr. Rangers by scores of 2-0 and 3-1. Nathan Pickett was easily the best player of the series, as he turned aside 52 of the 53 total shots that were sent his way. The Avalanche netidner owned a 0.50 goals against average, to go along with a .981 save percentage.

With only five goals scored during the series, the Avalanche saw just nine different players tally at least a point in the two games, with three players (Chris Aarons, A.J. Przystawski, and Victor Nikiforov) tallying a pair of points each.

As for the Rangers, Zack Norby collected their only goal of the series, while Billy Girard (game #1) and Aiden Curry (game #2) did everything they could between the pipes.

After ending their first year with their first title, the Avalanche are now heading back to Providence for the second consecutive season. 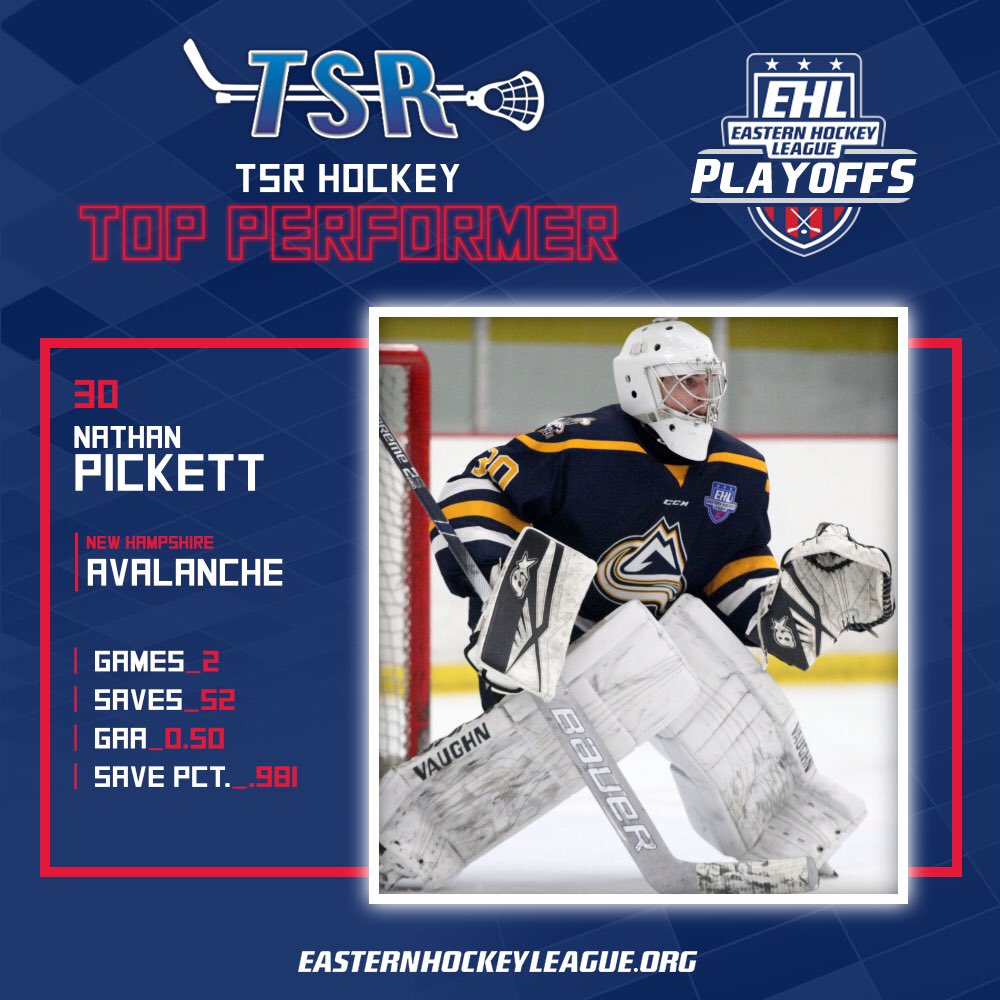 Last, but not least, we get arguably the best series of the Second Round. After the two teams split games #1 and #2, the Wilkes-Barre/Scranton Knights won a 3-2 battle last night (game #3) over the New Jersey 87s.

Looking at the Knights first, and they were led first and foremost by Thomas Walker between the pipes. In total this postseason, Walker is now 4-1-0, to go along with a 2.40 GAA and a .930 save percentage.

As for New Jersey, Dalton Jerzak played well as the youngest goaltender in the EHL Playoffs, and Daniels Leja notched five total assists in the series.

Overall, the series may have very likely come down to a huge glove save that Walker made with just a few minutes remaining in regulation. The Knights are now off to Providence for the first time, and they are doing so as the only team to advance that didn't win their division during the 2018-19 regular season. 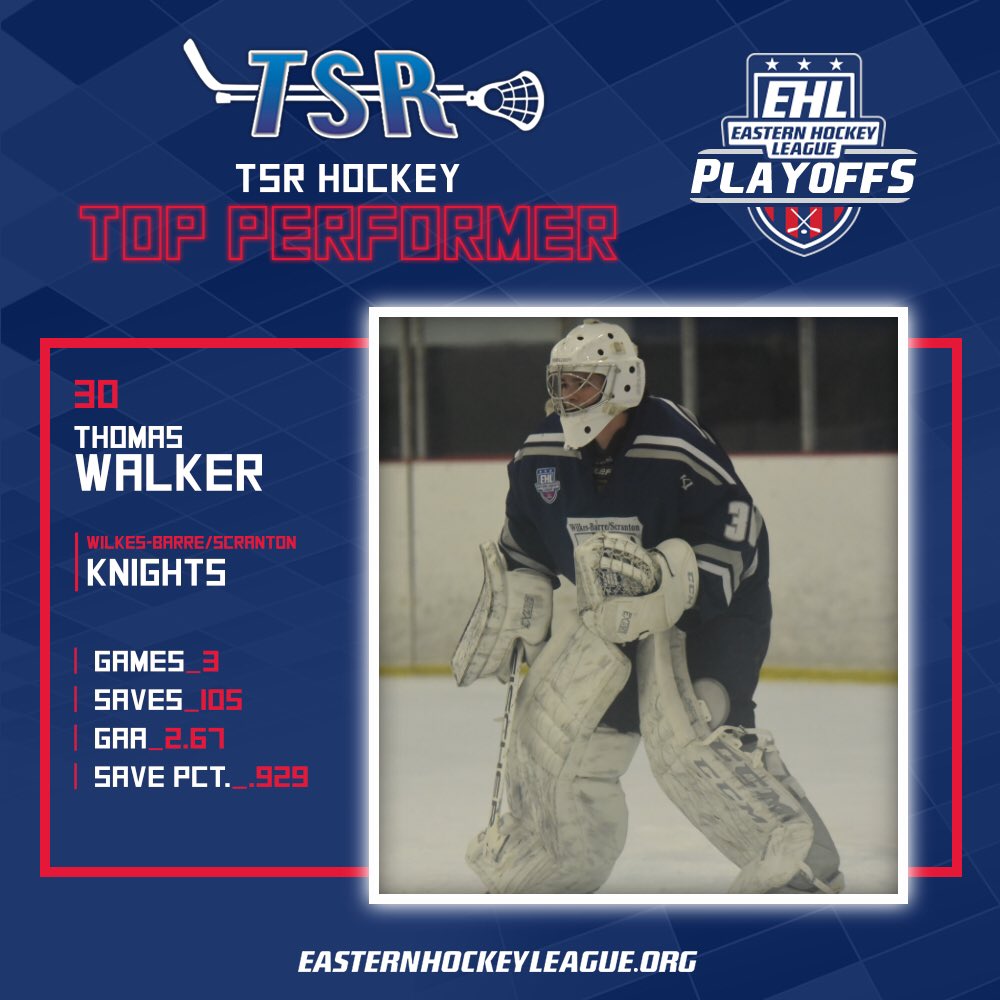 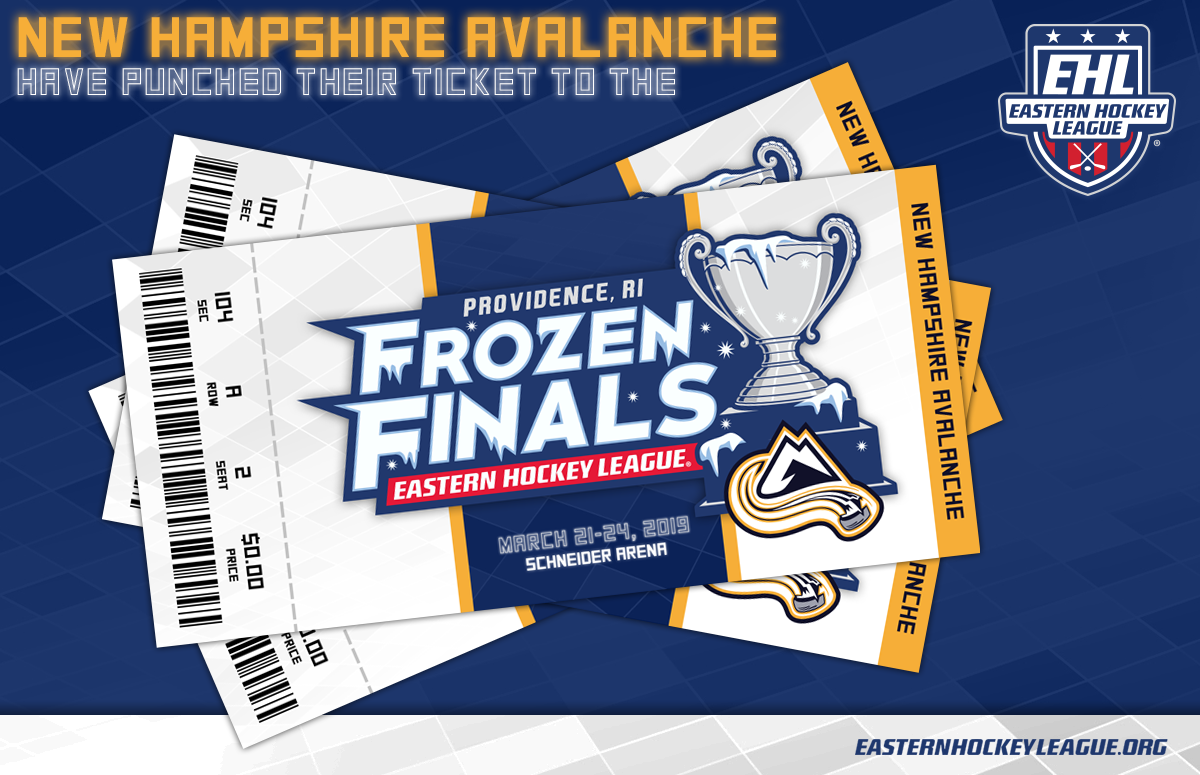 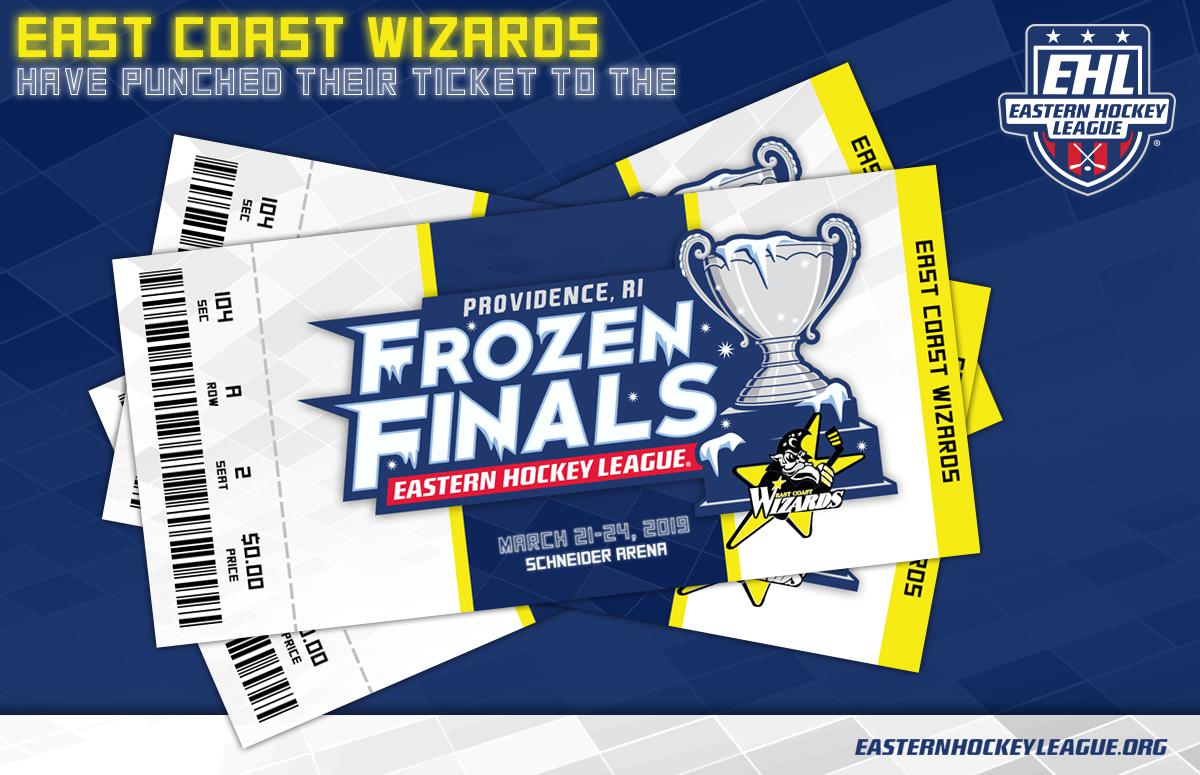 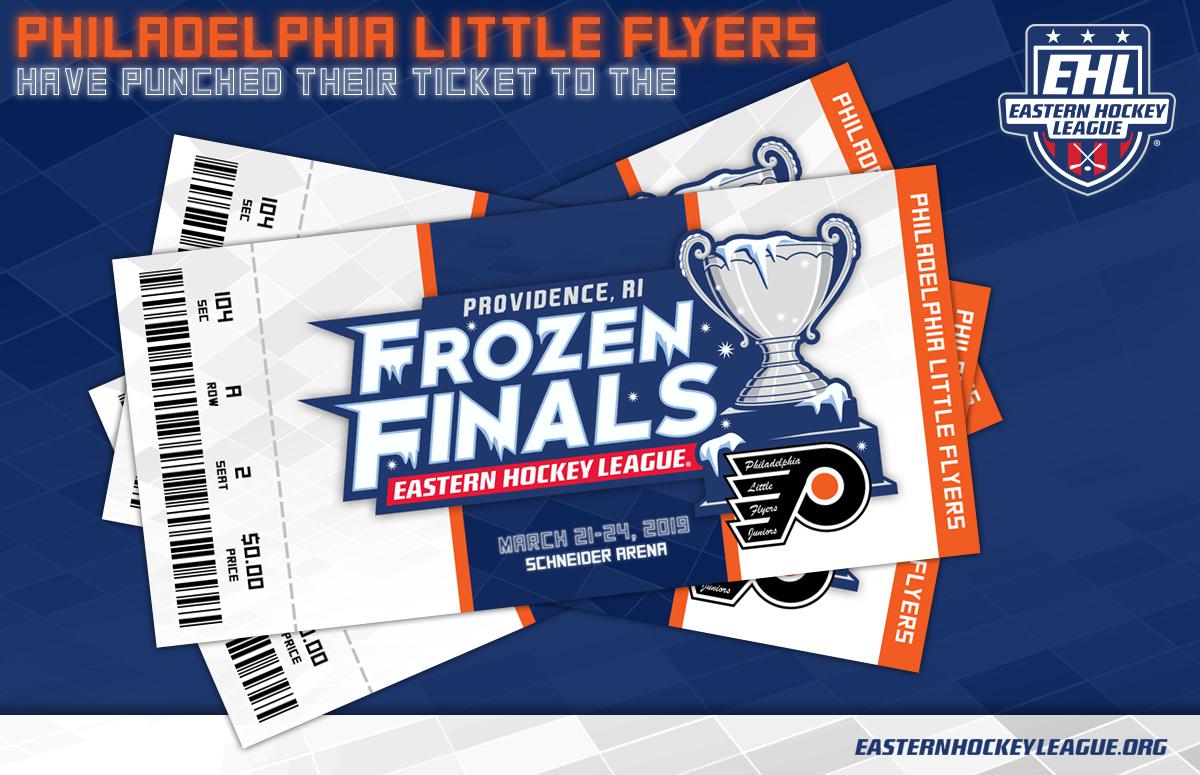 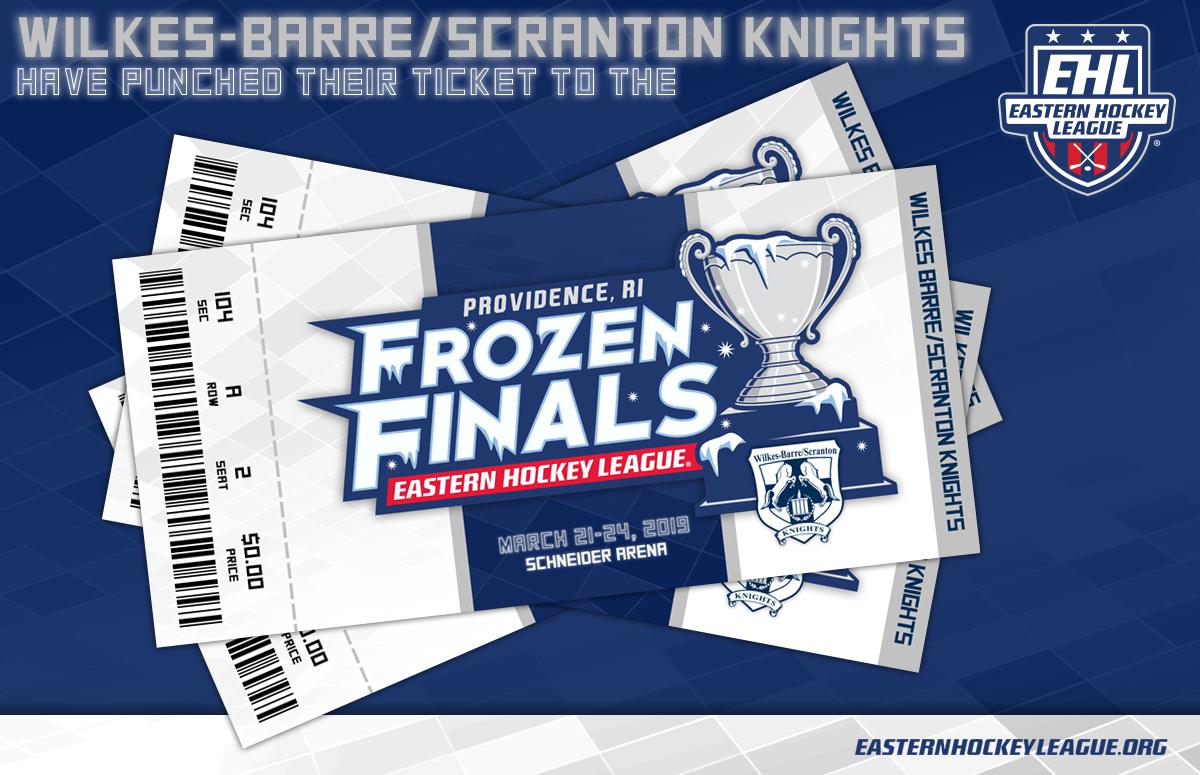