WALPOLE, MA -- Ryland Dukes, a forward for the Walpole Express, has committed to Gustavus Adolphus College for the fall of 2021.

The 2000-born native of Nashville, TN is in his 2nd season in the Eastern Hockey League (EHL), after spending the 2019-20 campaign with the Valley Jr Warriors. The Express captain has played in 81 career games throughout his time in the league, tallying 65 total points along the way.

"Ryland has been our group's leader from day one this year," said Express head coach and general manager Cody Campbell. "He has a calm but intense presence that the rest of his teammates feed off of. On the ice he has been a consistent offensive producer, as well as a reliable center and great penalty killer. Gustavus is getting a player that will contribute immediately on the ice, but more importantly, they are getting a person that is going to enhance the hockey program's culture as well as the college’s culture as a whole.”

Dukes is the latest Express player to advance to the Gusties through a strong pipeline that has been formed by Campbell. In total, Walpole has seen six different players that have committed to Gustavus Adolphus over the past two seasons. This fall Dukes will join a trio of current teammates in Cole Cavey, Jake Galvin, and Justin Sullivan. When the group arrives, they will then meet up with Tim Lopez and Patrick McDonald from last year's Express team.

"I think what makes Gustavus such a great fit for me is the balance I’ll have there as a student-athlete," said Dukes. "The academics, athletics, and sense of community there are all exceptional. It was important for me to find a school where both academics and hockey are taken very seriously, and I found that in Gustavus. I’m extremely excited to join the Gusties this fall."

Dukes went on to talk about his decision to return to the EHL this season, and the move he made to play for Campbell and the Express.

"Playing for Coach Campbell and the Express this season has been extremely beneficial for me both as a player and a person," added Dukes. "Every Express player is given the opportunity to improve and grow daily. I’ve made significant strides on the ice and as a leader this season thanks to Coach Campbell. Cody has stressed the importance of having strong culture within our group since the first day of training camp and it shows. I’m very appreciative of everything he and Coach Holmstrom have done for me this season."

Dukes and the Express have just a single regular season game remaining as they face-off with the East Coast Wizards on Sunday at 3:30 pm. Following that matchup, it will be time for the postseason to begin, and the 2nd seed in the Central Division will be taking on Dukes' former team in the First Round of the EHL Playoffs. 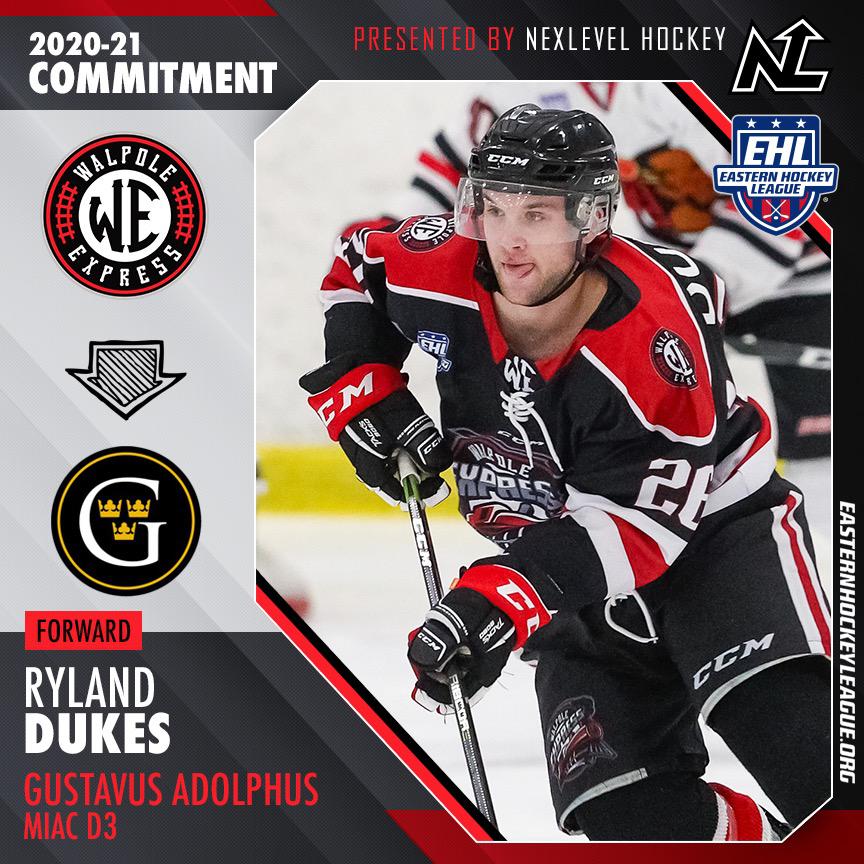