Tartaglione Headlines Newest Set of Stars of the Week

Below you'll find the 21st set of weekly top performers in the #EShow. The forward and defenseman awards are presented by Verbero Hockey, while the goalie honors come courtesy of Vaughn Custom Sports.

Tartaglione and the Ducks were amongst the busiest teams in the league this past week, playing six total games over a nine day stretch. Despite the challenging schedule, Tartaglione and his teammates skated away victoriously in all six contests, ultimately resulting in a climb all the way up to #3 in the South Division standings.

As for the 2000-born native of Bernardsville, NJ, Tartaglione notched at least a point in five of the six games for his team, scoring four times and dishing out six assists. The 10-point week gives Tartaglione 26 points in 27 total games since joining Protec back in mid-November. Now, it's postseason time for Tartaglione and the first-year EHL franchise, as they get set to face-off with the New York Apple Core in the First Round of the EHL Playoffs.

Sticking with the South, as well as with teams that were busy this past week, Sullivan and RoughRiders hit the ice for five games of their own. The '01 native of Yorktown, NY contributed consistently for his team, scoring once and notching six total assists along the way. Similar to Tartaglione, Sullivan averaged just under a point per game during the regular season, tallying 20 total points in 22 games.

Looking forward, the solid finish for the RoughRiders helped them climb up to the #5 seed in the South, which earns themselves a matchup with Team Maryland in the First Round.

We move to the Central Division for this week's top netminder, as Yost was near-perfect in two appearances for his team. In his first start he turned aside 38 of 40 total shots in a 3-2 victory over the Boston Jr Rangers. He then played a period against the Walpole Express on Sunday and added another 14 saves to his credit. Entering the postseason, Yost has played well down the stretch, lowering his GAA down to 2.92, and increasing his save percentage up to .918 for the season.

As just an '02, Yost is one of the youngest starting goaltenders in the EHL, but what's interesting is that he will be lining up against a fellow '02 in the First Round of the playoffs. Yost and the Wizards kick-off their series against Stefan Kulhanek and the Railers Jr Hockey Club tomorrow morning at 11:30 am in Worcester, MA.

The EHLP is pleased to announce that Samson Leifer (Walpole Express), Ben Peiffer (New Jersey 87s), and Dylan Lawrence (Boston Jr Rangers) have been named the Top Performers for Week #21.

Leifer and the Express returned to action and won three of their five total games this past week. After getting shutout by Lawrence and the Rangers on Wednesday, Leifer helped lead the way to a three-win week with five goals and two assists in the five total games. For the season, the '02 native of Colorado Springs, CO now has 22 points in 30 total games.

Walpole will be the #3 seed in the upcoming Central Division playoffs, drawing a rematch with the Railers Jr Hockey Club, the same opponent that the Express faced-off against in last year's postseason.

Moving back to the blue line, Peiffer and the 87s clinched the 3rd and final playoff bye in the EHLP when they knocked off the New Jersey Renegades in overtime on Friday night. With the win, the 87's clinched the top seed in the South Division. They will now await to find out the winner of the Philadelphia Little Flyers and New Jersey Renegades series to learn who their next opponent will be with a trip to the EHL Frozen Finals on the line.

As for the '03 native of Montclair, NJ, Peiffer proved once again why he is one of the top prospects in the EHLP. The young defenseman notched five total assists over the two-game weekend for his team, giving him an even 28 points in 28 total games so far this season.

As mentioned above, Lawrence took care of business in his lone start of the week, turning aside all 24 shots that the Express sent his way this past Wednesday. The win was Lawrence's 3rd of the season, as the young netminder has gained valuable experience while playing for one of the top organizations in the EHLP.

Lawrence and the Rangers moved up to #1 in the Nexlevel Hockey Power Rankings as they stretched their winning steak out to nine games over the weekend. At 29-3-4, the Rangers have officially put the pressure on the #2 New Hampshire Avalanche who had appeared to be in control all season long with regards to the EHLP Regular Season Championship.

The Avalanche have three regular season games remaining in which they will have to claim all six points in order to secure their first-ever Regular Season title. If they are unable to do so it will be the 4th straight EHLP Regular Season Championship for the Rangers. 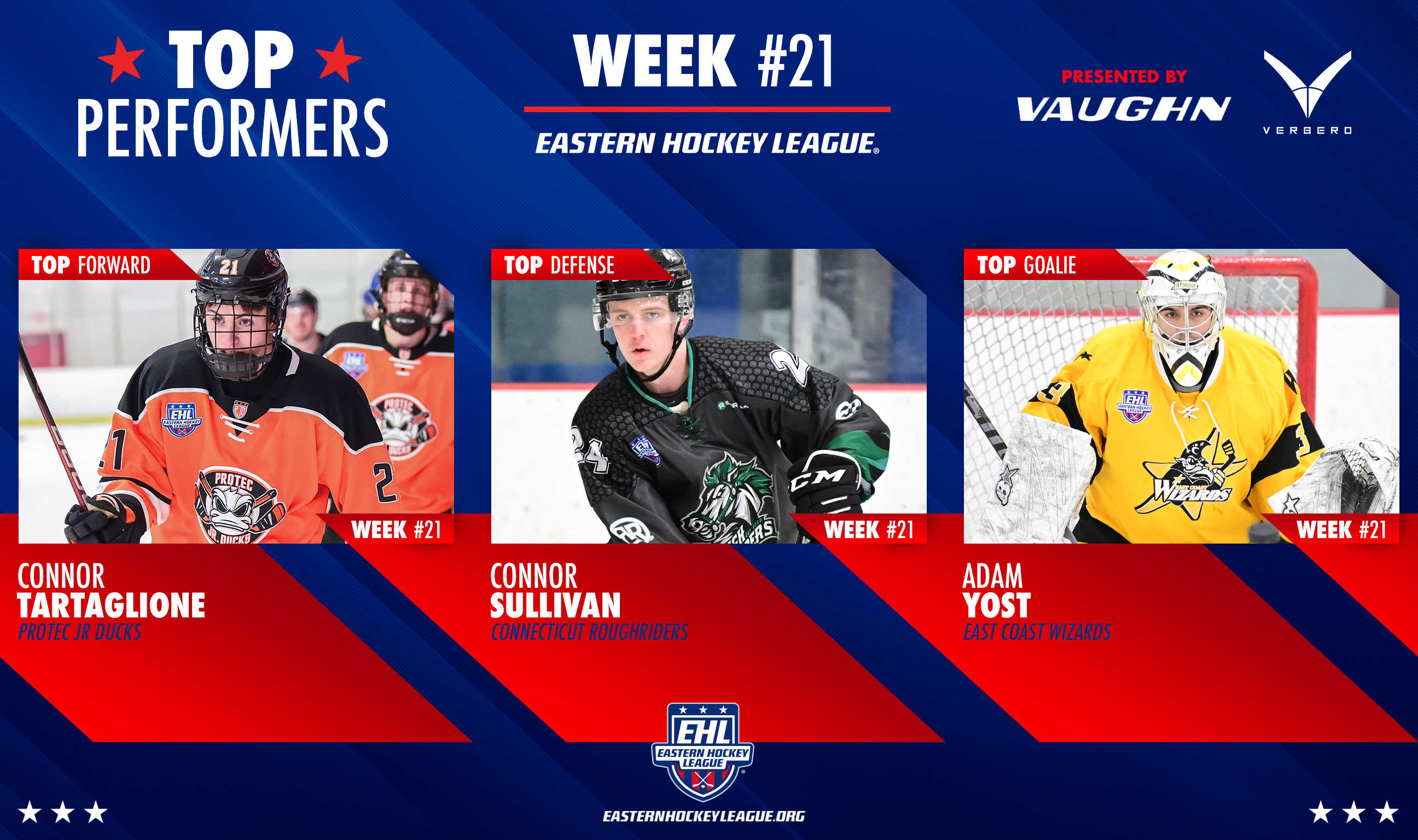 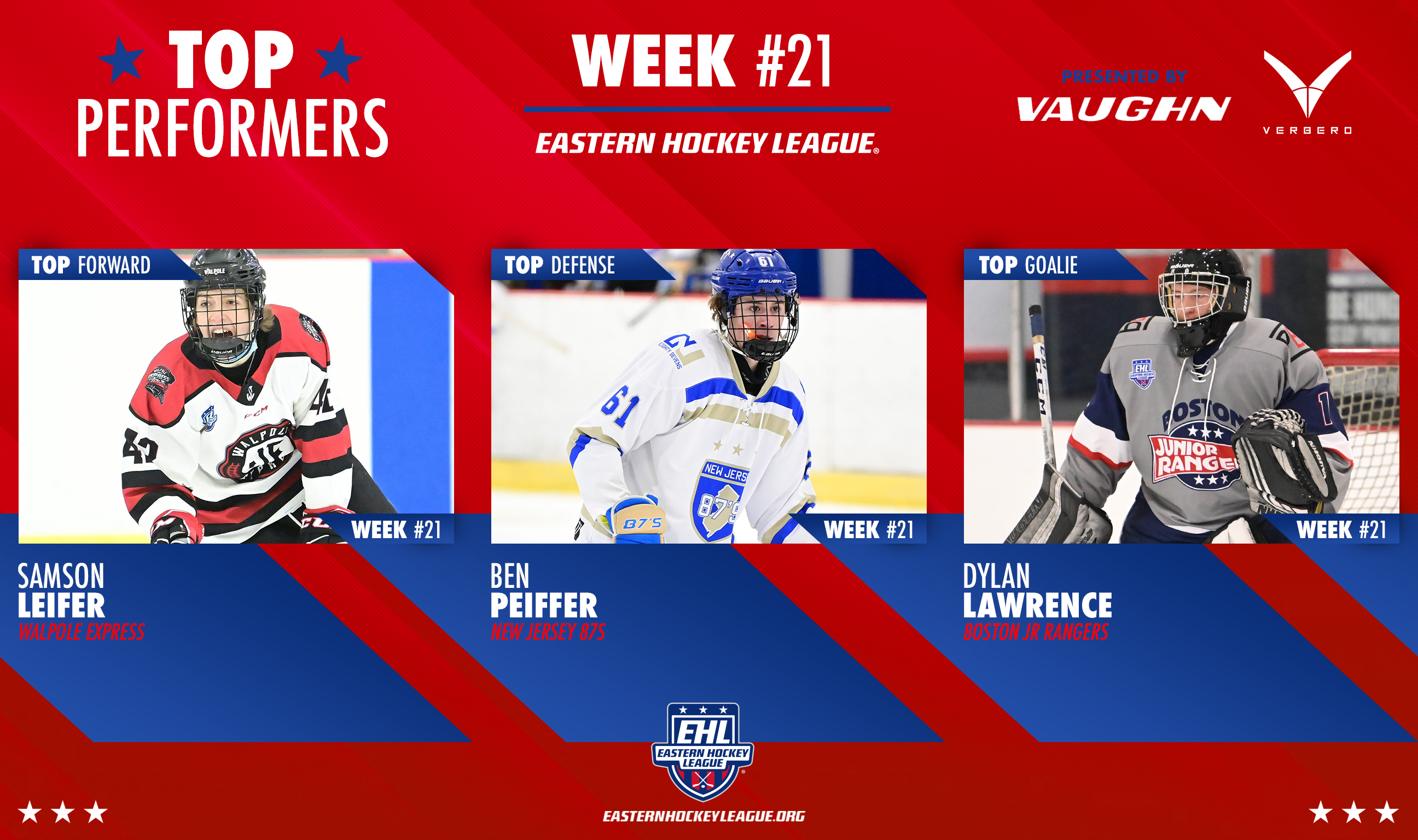