EHL Pipeline of the Week - UNE

BIDDEFORD, ME -- Dating back to the formation of the Eastern Hockey League (EHL) in 2013, a total of 17 players have made their commitments to the University of New England while playing in the #Eshow. The Nor'easters play out of a competitive, Division III conference, full of EHL alumni.

“The EHL is a great path to college hockey," said UNE head coach Kevin Swallow. "It is a good developmental league and there are a lot of great coaches that help develop players and move them on to the next level. Some of the best players I have coached played their junior hockey in the EHL.”

This past Fall, the conference that UNE competes in took on a new name as the ECAC Northeast became known as the Commonwealth Coast Conference (CCC). This upcoming Fall, 20 new players will be moving up from the EHL to the CCC, and beginning their collegiate hockey careers.

In the first year of the CCC, the Nor'easters fell in the championship game to Endicott by the score of 5-4. The epic matchup included 7 points tallied by EHL alumni. (BOX SCORE)

Be sure to check back in again next week for a new EHL Pipeline of the Week.

PAST PIPELINES OF THE WEEK 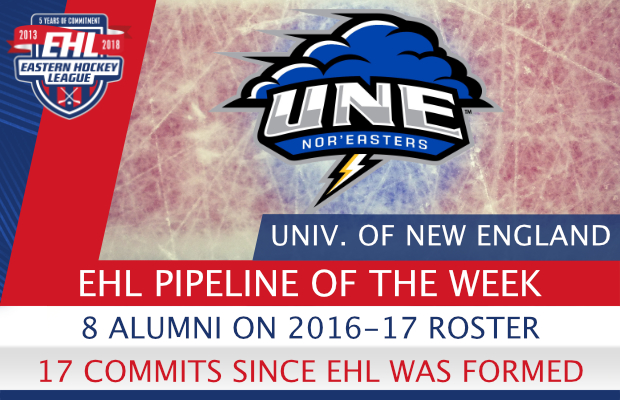