Jennings Headlines Newest Set of Stars of the Week

Below you'll find the 18th set of weekly top performers in the #EShow. The forward and defenseman awards are presented by Verbero Hockey, while the goalie honors come courtesy of Vaughn Custom Sports.

The EHL is pleased to announce that Will Jennings (East Coast Wizards), Connor Sullivan (Connecticut RoughRiders), and Kyle Penton (New England Wolves) have been named the Top Performers for Week #18.

Jennings and the Wizards swept their home-and-home series this past weekend with the Valley Jr Warriors, winning by scores of 8-3 and 7-3. As for the '01 native of Arlington, MA, Jennings was one of many players that contributed on the scoresheet for the Wizards, but he was the only skater to notch five total goals in the two games. For the season, Jennings now has 27 points in 31 total games to date, including 14 points since January 13th.

The Wizards are 7-2-0 in their first nine games of the 2nd half, and have climbed all the way up to 3rd place in the Central Division. Jennings will look to keep the momentum rolling as his team battles for home ice advantage in the upcoming playoffs.

Sullivan and the RoughRiders were busy this past week, splitting four games over a six-day span. As for the '01 native of Yorktown, NY, Sullivan tallied a point in all four contests, finishing with five total points over the course of the week. Also, even though it doesn't count towards his overall totals, Sullivan picked up a huge goal in Friday's shootout with Team Maryland. Since joining Connecticut in early November, Sullivan has an even 13 points in 13 total games.

While the 2nd half of the season didn't start the way the RoughRiders had hoped, this past week featured a nice turn-around for the club, as they continue to battle for playoff positioning in the South Division.

Shifting up to the North Division for the final award of the week, Penton stood tall against the New Hampshire Avalanche this past Saturday. The 2000-born native of Waltham, MA turned aside 39 of the 40 total shots that were sent his way, en route to his 7th victory of the season.

The veteran goaltender committed to the University of Southern Maine back in November, and paired alongside a Rivier University commit in LJ Newell, the Wolves are feeling confident about their goaltending duo heading into the EHL Playoffs.

Mattson and the Renegades split this past weekend's home-and-home series with the Philadelphia Little Flyers, as New Jersey has now won two of their last three contests. As for the '02 native of Randolph, NJ, just like Jennings in the EHL, Mattson racked up five total goals over the two-game span. For the season, Mattson now has 33 points in 24 total games, as he tries to duplicate the 53 points he put up over the course of the entire 2019-20 season.

Looking forward, Mattson and the Renegades are now set for another home-and-home series against the Little Flyers on Friday and Saturday. He'll look to keep the momentum rolling, as the push for the postseason continues.

Damren, Digiacomo, and the Lumberjacks posted a perfect record of 3-0-0 from their games from this past week. After beating the New England Wolves by scores of 5-1 and 4-0 on Wednesday and Sunday, the Lumberjacks then capped off the week with a 4-0 shutout victory over the top-ranked New Hampshire Avalanche (Monday).

As for Damren, the '01 native of West Lebanon, NH tallied multiple assists in all three contests, notching two, two, and three assists respectively over the course of the week. It's also worth pointing out that four of the seven total assists came on the power play, as the Lumberjacks were clicking on the man advantage. For Damren, this Star of the Week honor is his 2nd of the season, paired alongside his Top Performance from Week #15.

As for Digiacomo, the '01 native of North Attleboro, MA was in net for each victory over the Wolves, turning aside 62 of the 63 total shots that were sent his way. The pair of victories were Digiacomo's 5th and 6th respective wins of the season, all while the netminder also lowered his GAA down to 2.24 for the season, and increased his save percentage up to .908.

Damren, Digiacomo, and the Lumberjacks have a busy week coming up, with four games in five games, starting tomorrow at 11:30 am. 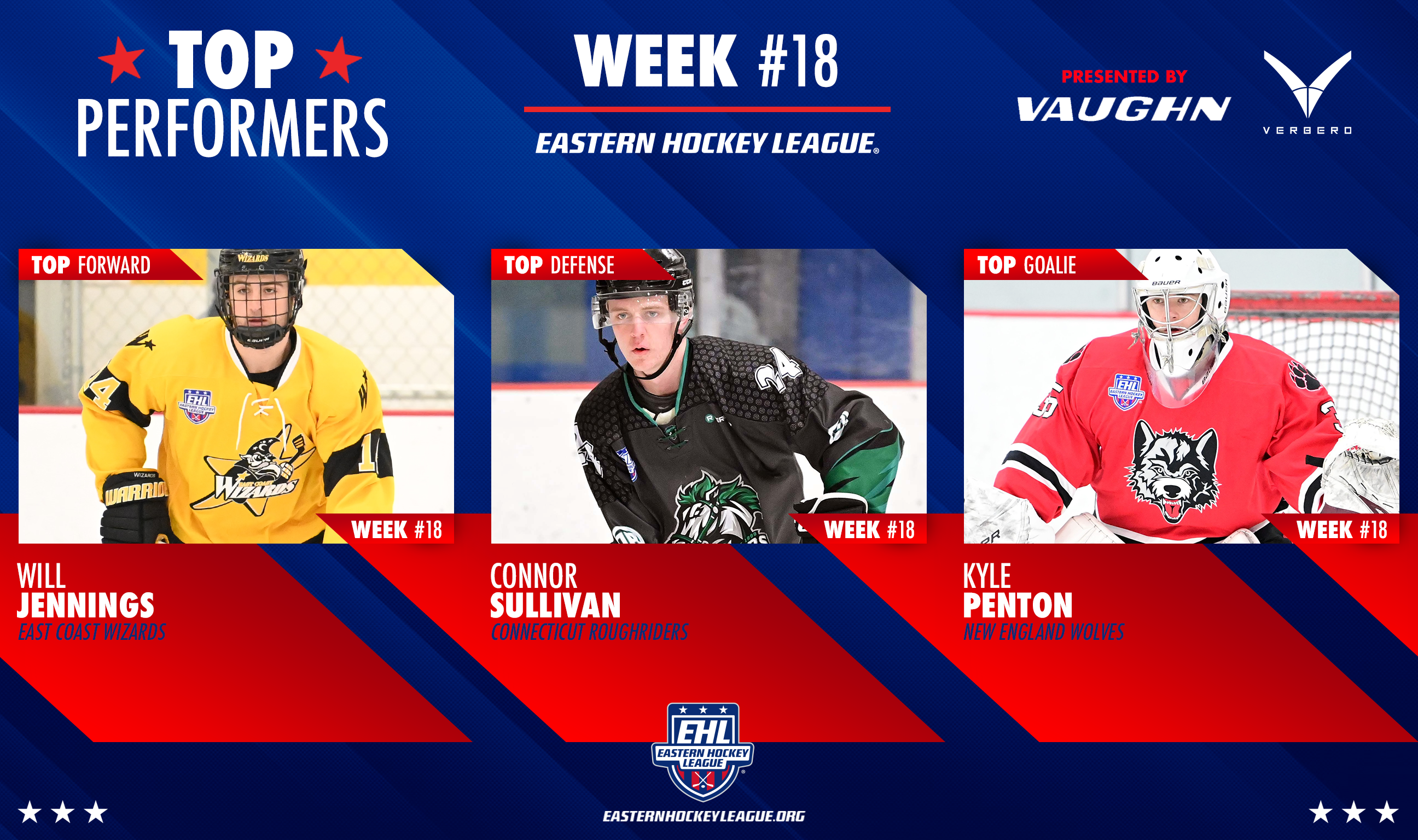 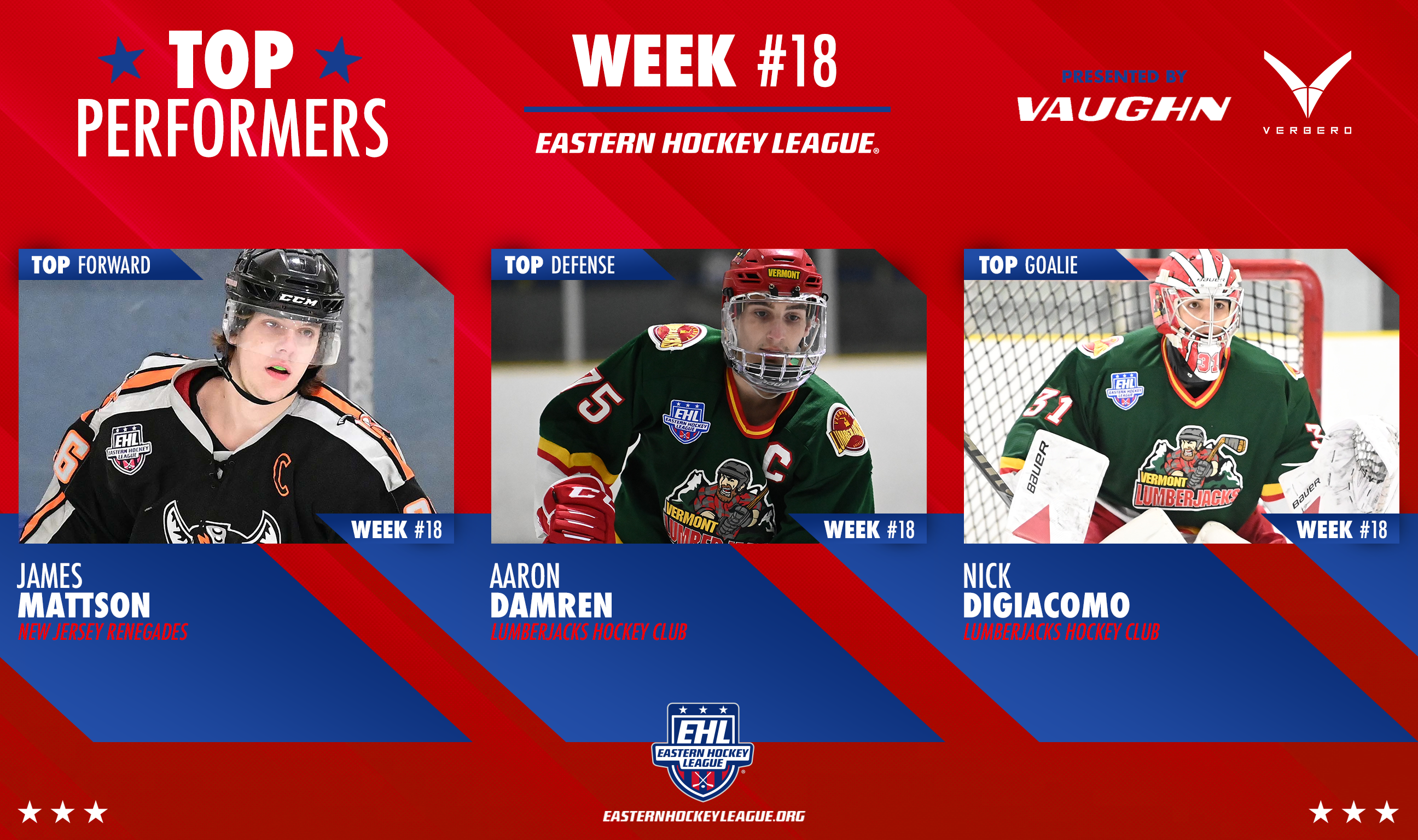